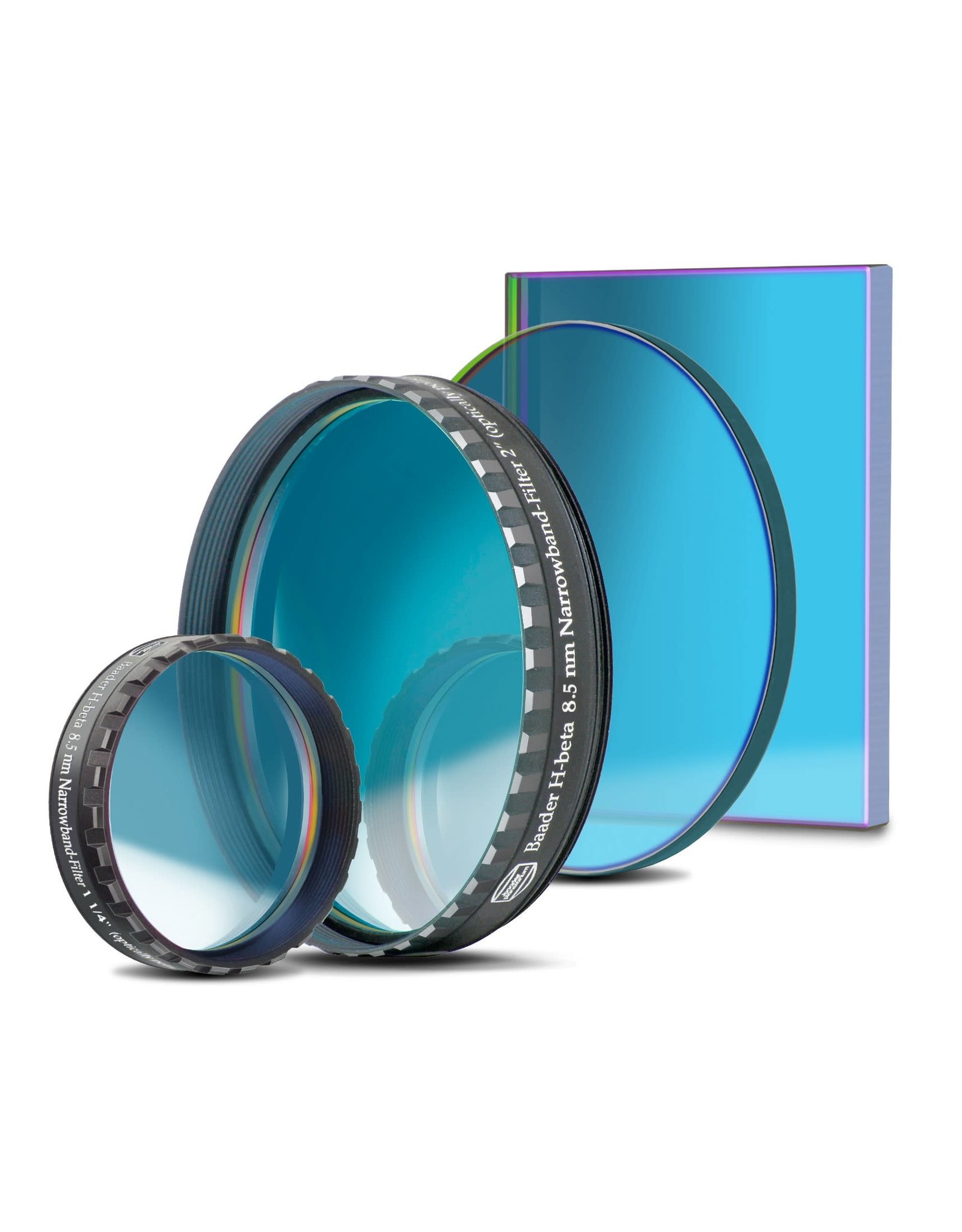 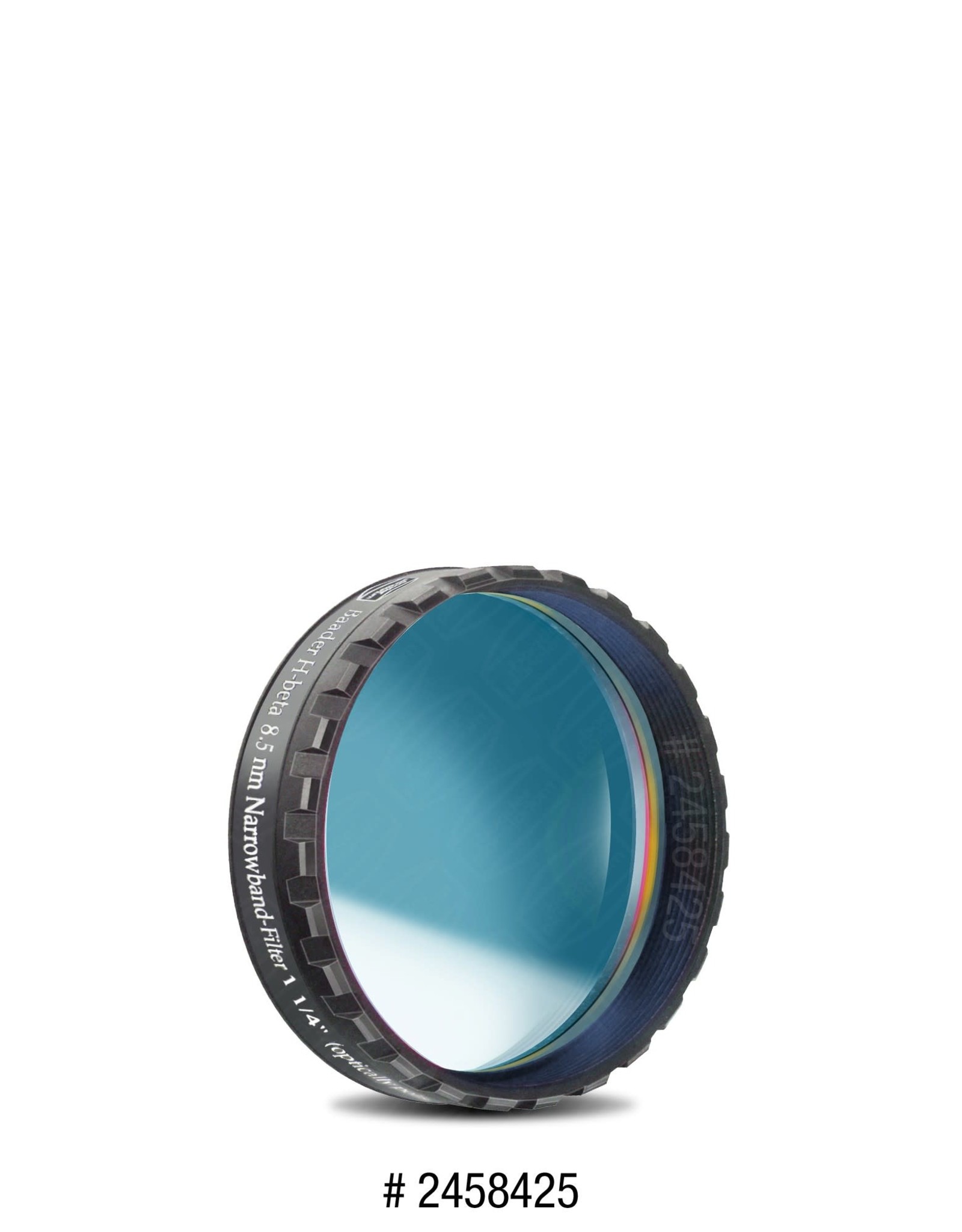 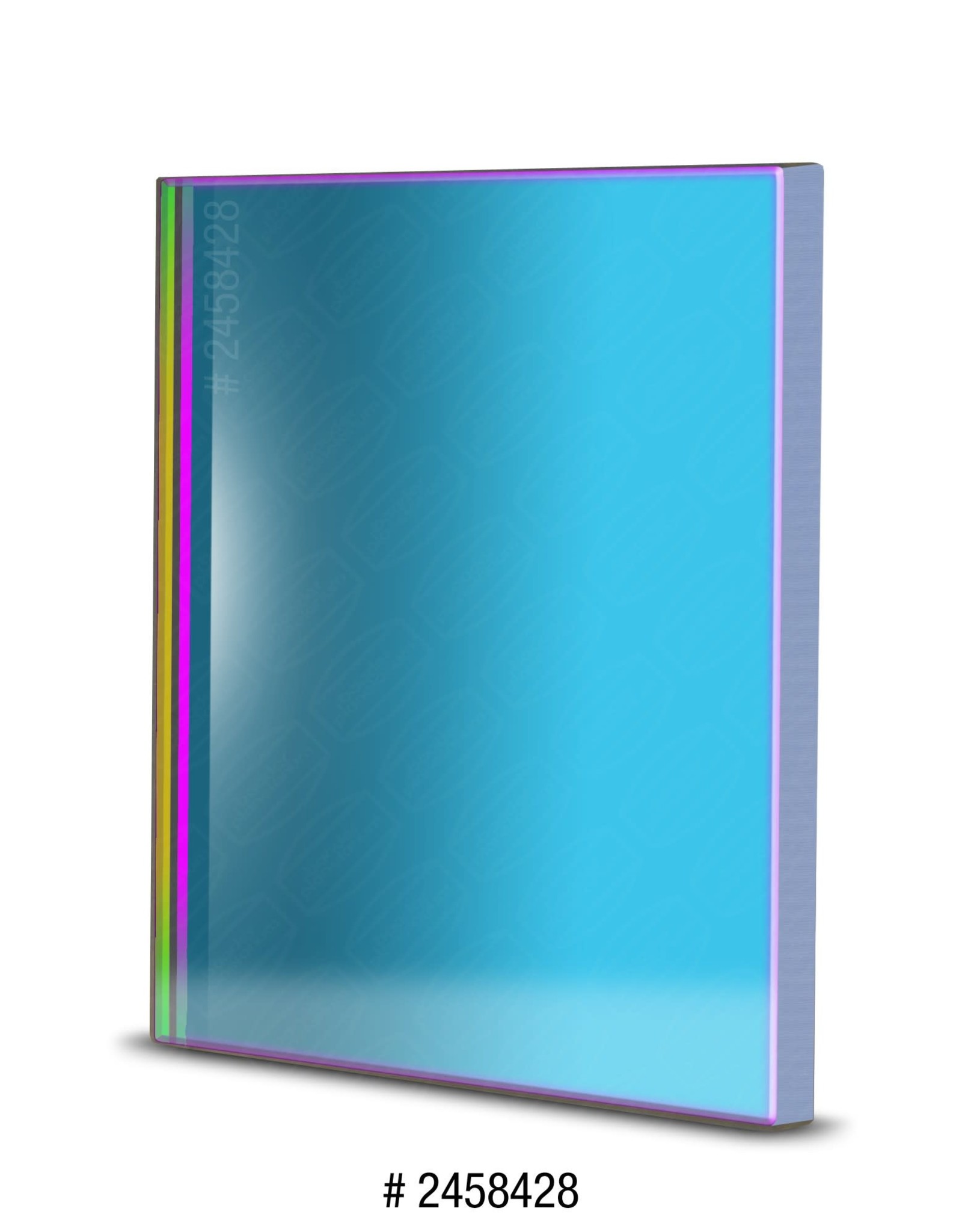 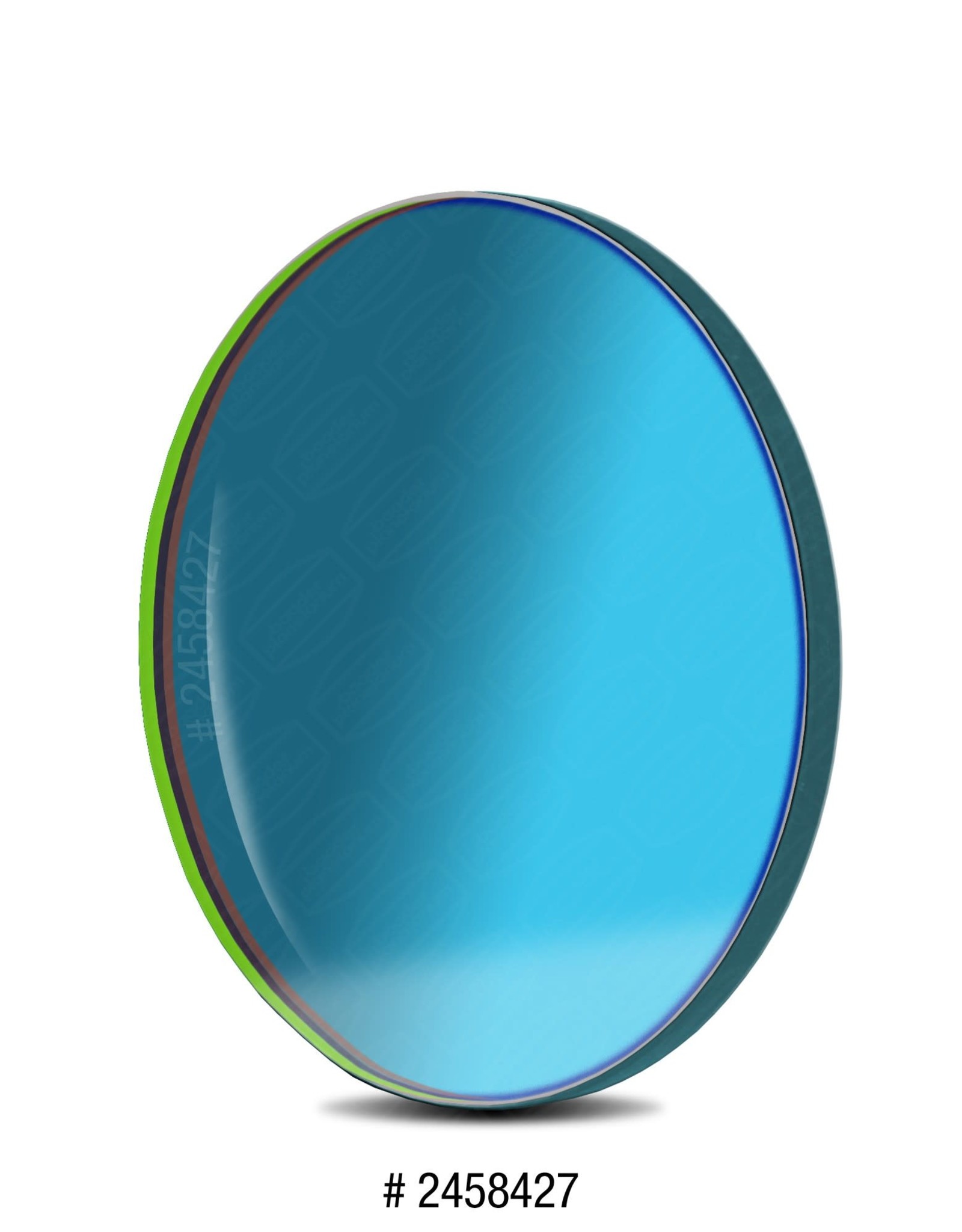 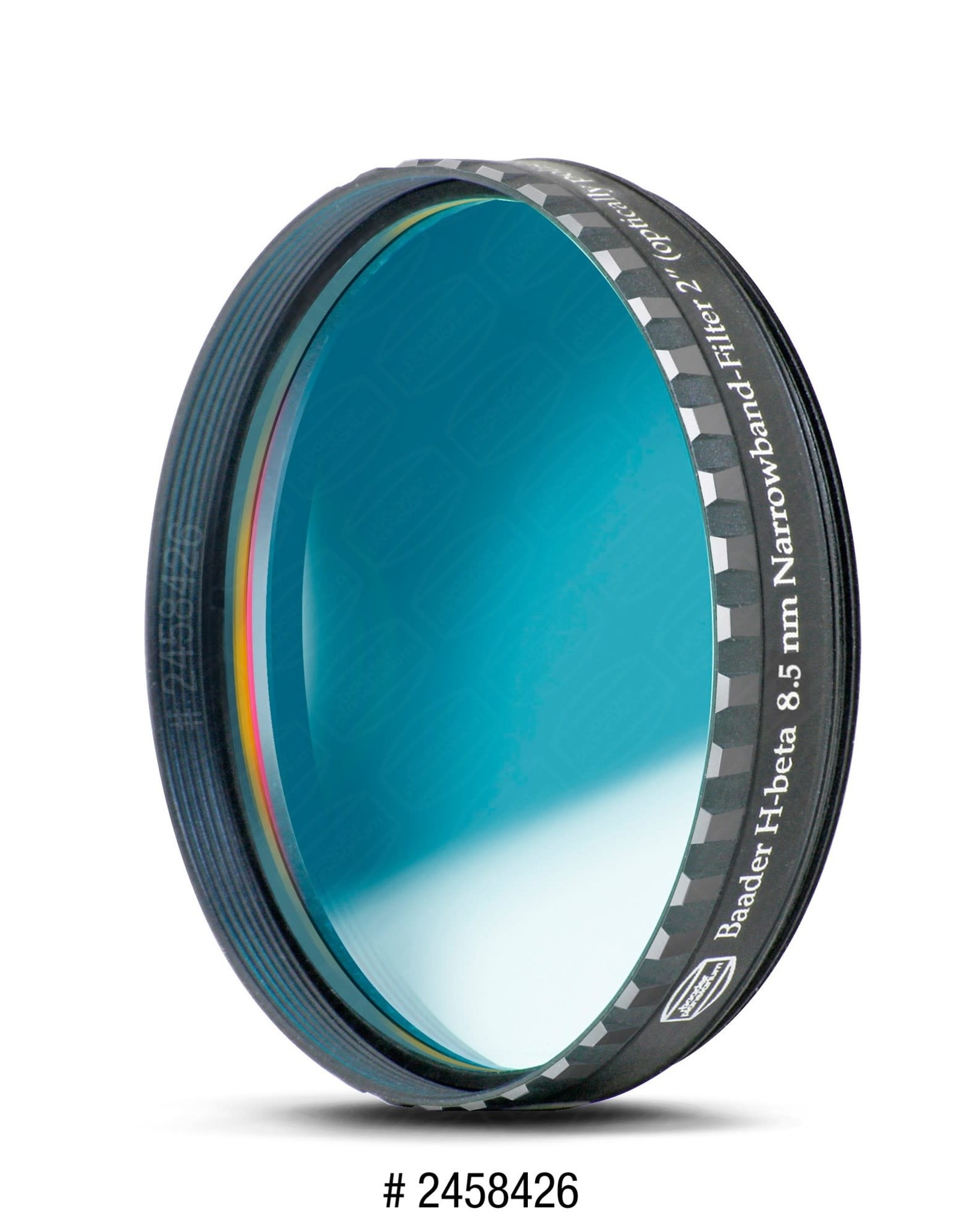 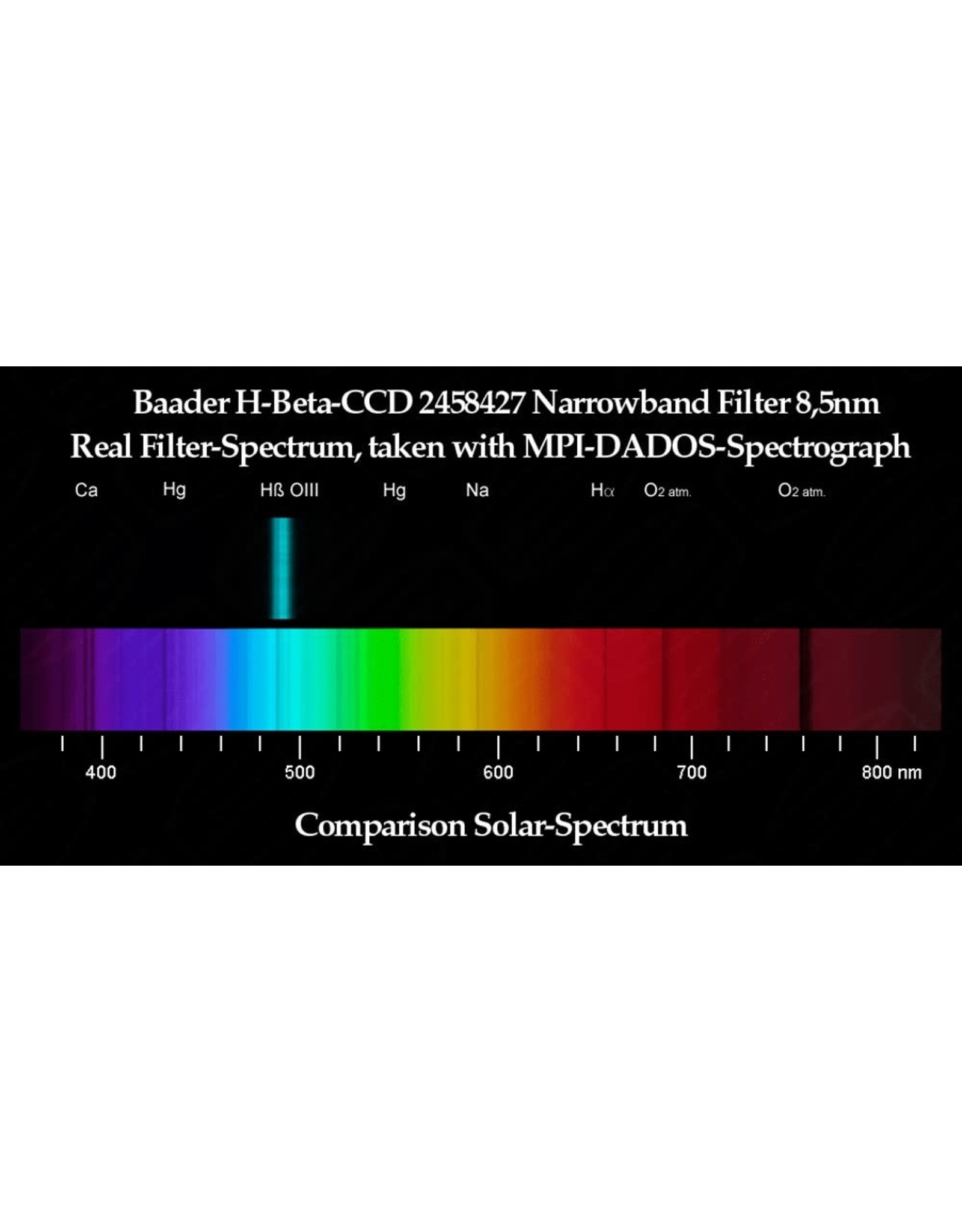 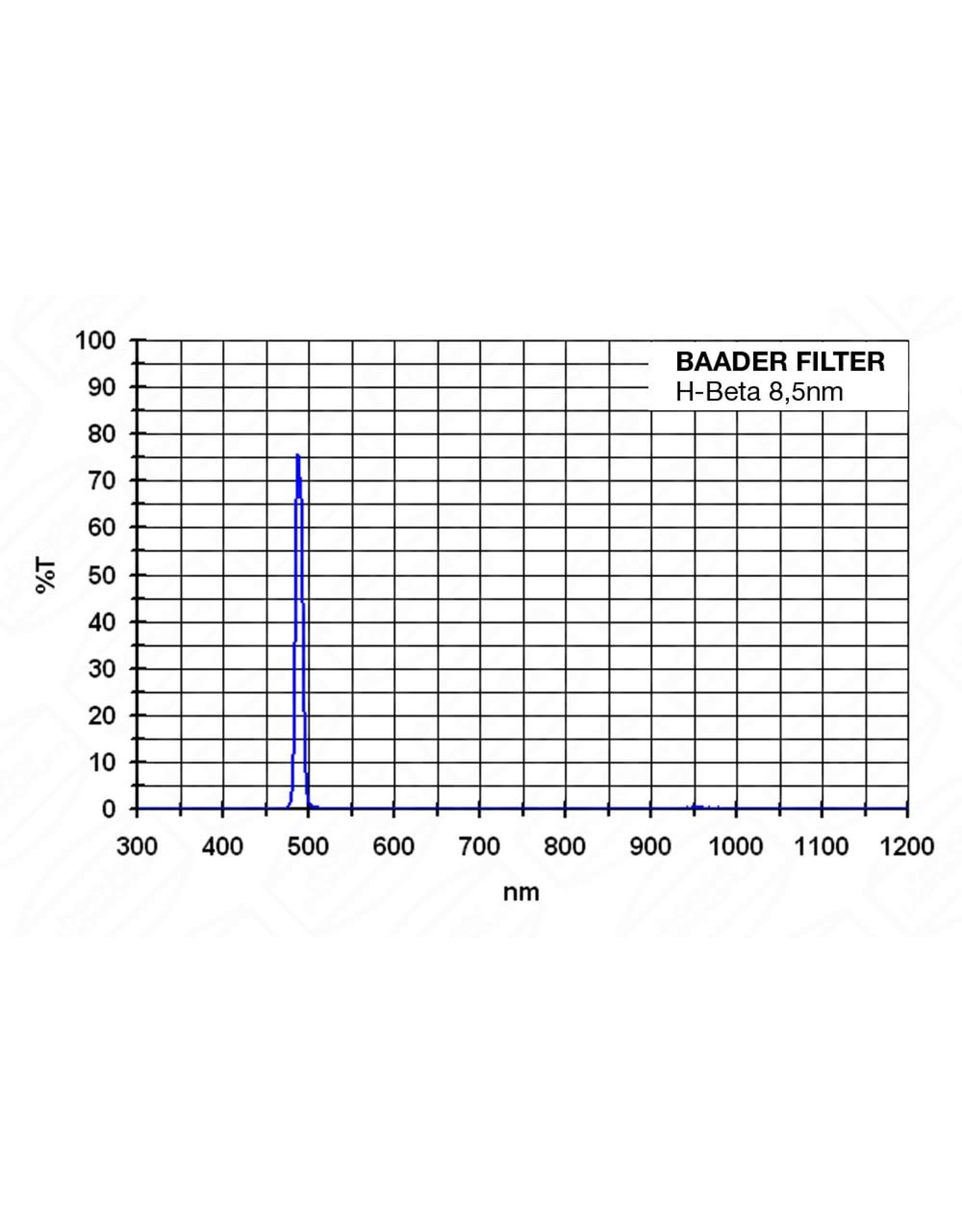 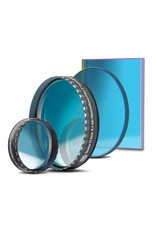 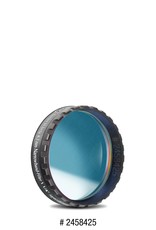 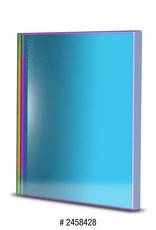 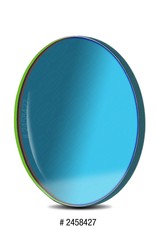 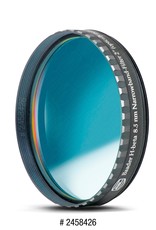 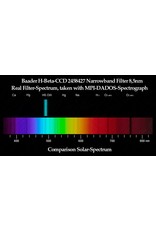 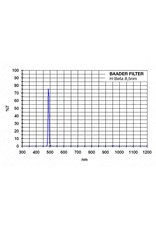 The Baader H-Beta-Filter with 8.5nm half width is especially useful at telescopes with 8" or larger apertures or if you are working with large exit pupils. This narrowband-filter delivers a much higher contrast, compared to common visual H-beta-filters. H-Beta-nebule-filters with a wider half-width deliver a brighter image and will also show you e.g. the California nebula,but it wont be so clear, and you will miss many of its inner structures. Without any filter, this nebula (to name just one of many) will be completely invisible under brighter skies.

The development of narrow-band H-Alpha-filters soon proved to be a "Game-Changer" for Amateur-Astrophotographers. No other spectral line of emission nebulae will give you so much information for the creation of "pretty pictures" as this Hydrogen-line. This is supported by the better coatings, sensitive CCD-cameras, motorized focusers and last but not least the the incredible tracking precision of modern mounts, which allow for very long exposure times with very narrow-band filters. Modern images are often based on exposure times of 30 hours through the three common, very narrow-band nebula filters. But to make use of this, the mount must provide "subpixel"-tracking, the focuser must not flex even for a micron, and its motor must compensated for temperature changes by keeping the focus up to a fraction of a millimetre... All this is possible – but you need high-end equipment.

This is not necessary for visual observations. But unfortunately, we do not profit from those photographically wonderful filters when we are looking through the eyepiece – at low intensities at night, the human eye is almost blind for this part of the spectrum. During daylight, when there is plenty of light, we can easily see H-Alpha. But at night and low-light, we cant perceive these wavelengths. In contrast to a camera, our eyes also cant add up the light.

Because of this, most visual observers use the well-known O III-filter. The human eye has got its highest sensitivity between 500nm and 520nm, where we can observe many structures in supernova-remnants, planetary nebulae and so on. But they are pretty useless for deep sky objects which shine mainly in H-alpha.

For the H-alpha-objects mentioned above, the H-beta-line is a good option: At 486nm, it still quite close to the region of highest sensitivity of our eye. Because of quantum-mechanical coupling with H-Alpha, we can usually see the same structures. H-Beta-filters are much more efficient than O-III, because most nebulae emit hydrogen-light – although H-Beta is not as popular as H-Beta.

A H-beta filter can be regarded as a visual H-Alpha-filter.

The H-Beta-spectrum is indeed very interesting. Quantum-mechanics define a fixed ratio between H-Alpha and H-Beta, but because of the shorter wavelengths, H-Beta has got a higher energy. That's why H-Beta suffers from a higher extinction rate in interstellar dust regions, which can easily be detected. The ratio between H-Beta and H-Alpha gives you information about the amount of dust between us and the source, which is especially interesting for scientific work. For astrophotography, you can scale down the intensity of H-Alpha to simulate an H-Beta-filter – and if you are observing with your eyepiece, you will see structures which were almost invisible before.

Visual observers profit from the fact that a H-Beta-filter can show the dust regions in hydrogen-emitting nebulae quite clearly, similar to a photo-graphical H-Alpha-filter. Larger telescope apertures can even show the split-up into two lines – and the soft phase-out towards the edge.

The filter is almost as impressive when you are looking at the dust tails of comets. Especially light with shorter wavelengths will be scattered more in the dust tail, so that the contrast to its surroundings increases. Light with even shorter wave-lengths will be scattered even more, but our eye is not so sensitive for these parts of the spectrum. The true dimensions of the sometimes very long dust tail may only be recognizable in the eyepiece with the help of a H-Beta-filter. The H-Beta line is also outside of the prominent lines of the gas tail, so the dust tail can be better discerned from the gas tail – and the contrast is increased even more.

A dielectric H-Beta-filter is no allround-filter like e.g. a Neodymium-Skyglow-filter. But it is the best available tool to see faint details, because you can visually see the dominating hydrogen emission lines in the sky – something which an O-III-filter cant show you. Together with an O-III-filter, it covers the most important spectral lines of emission nebulae and is an important tool for visual deep-sky-observers.