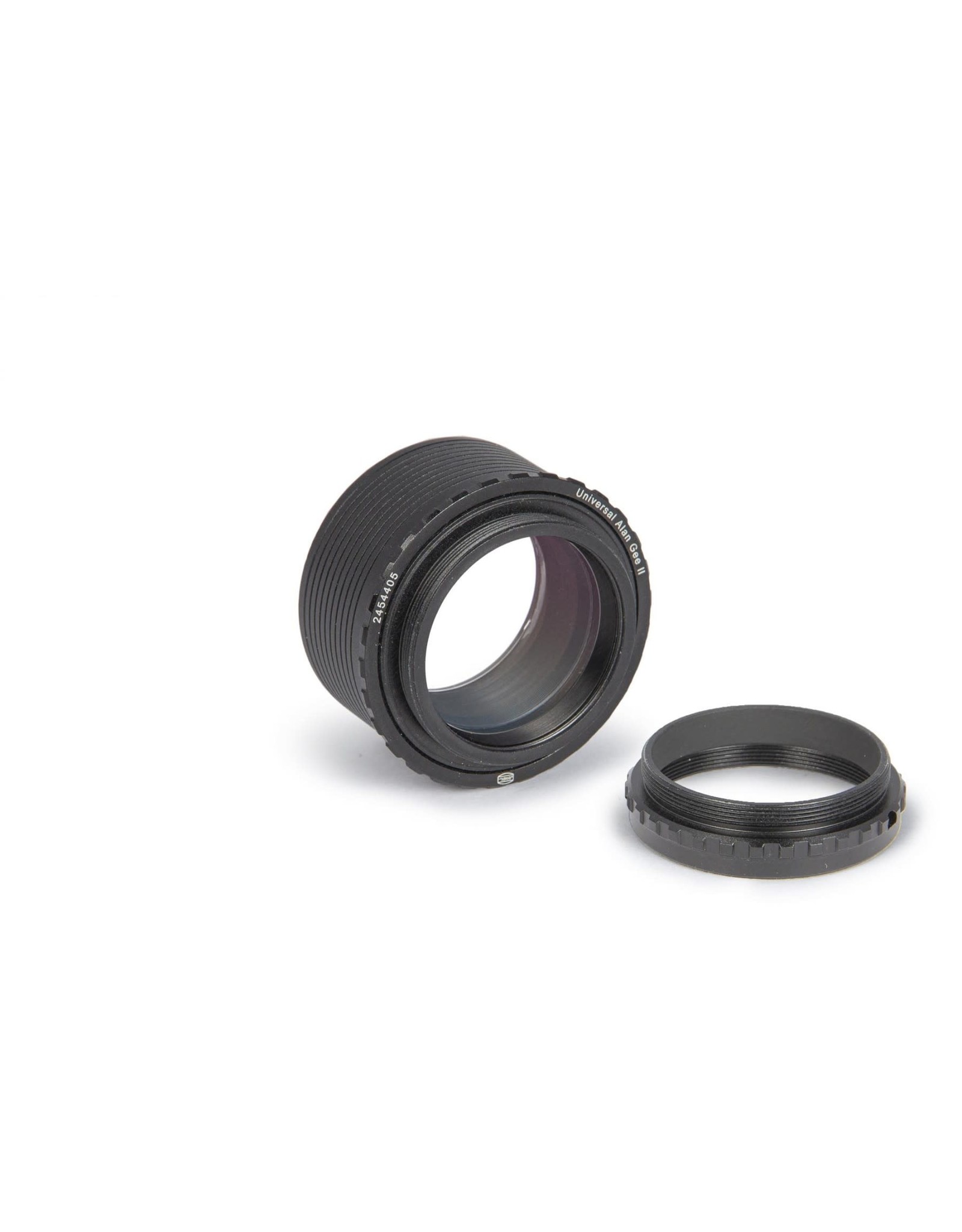 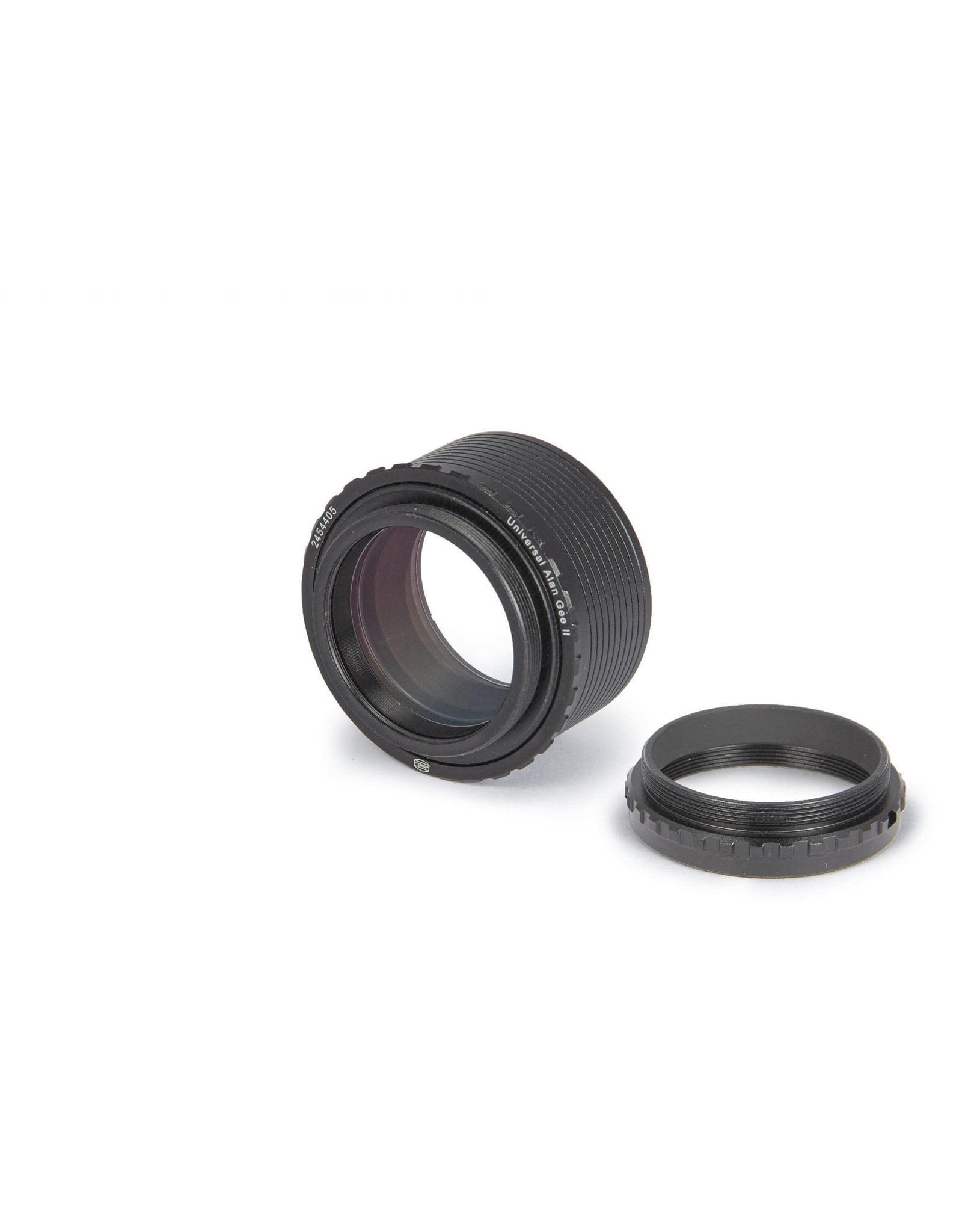 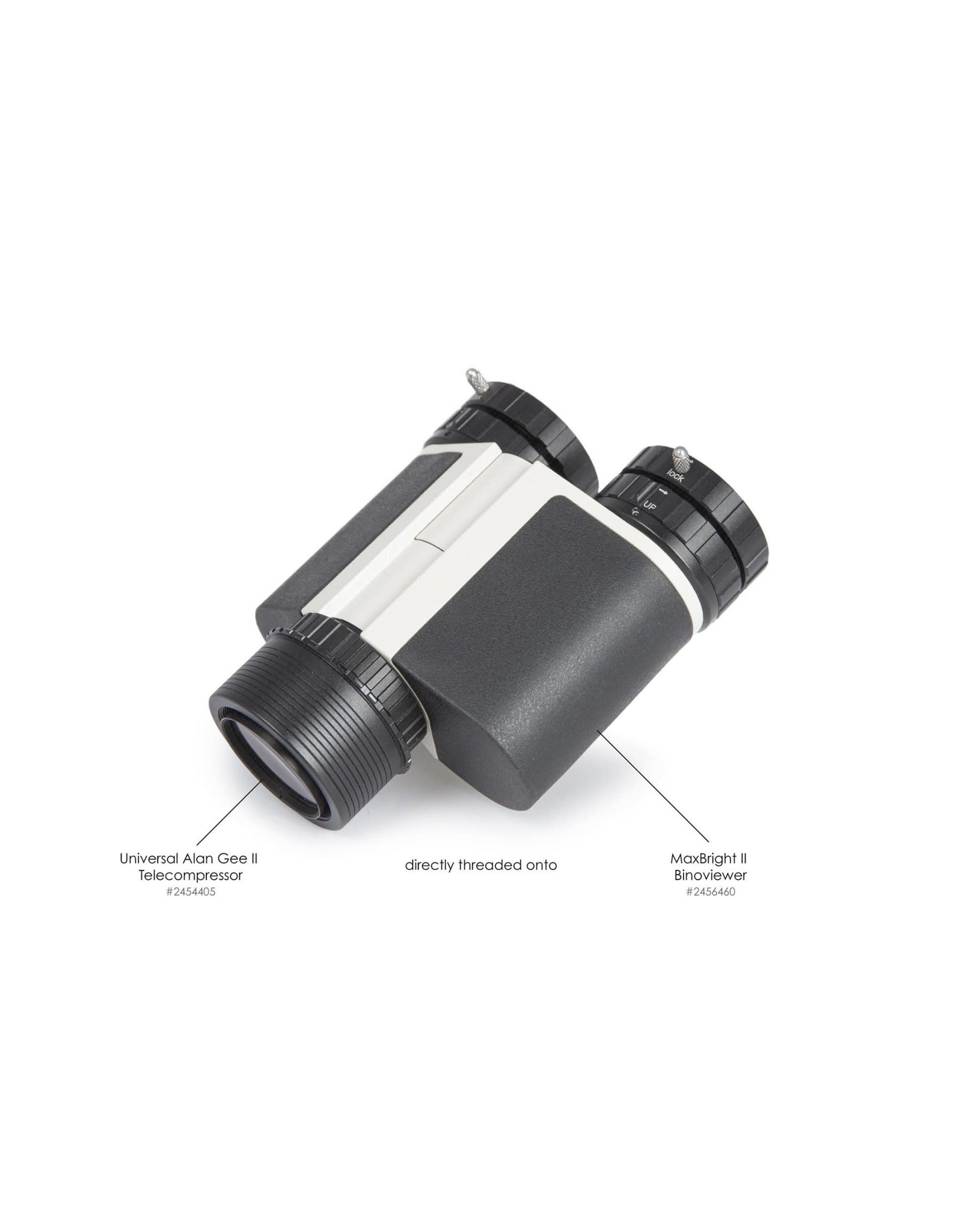 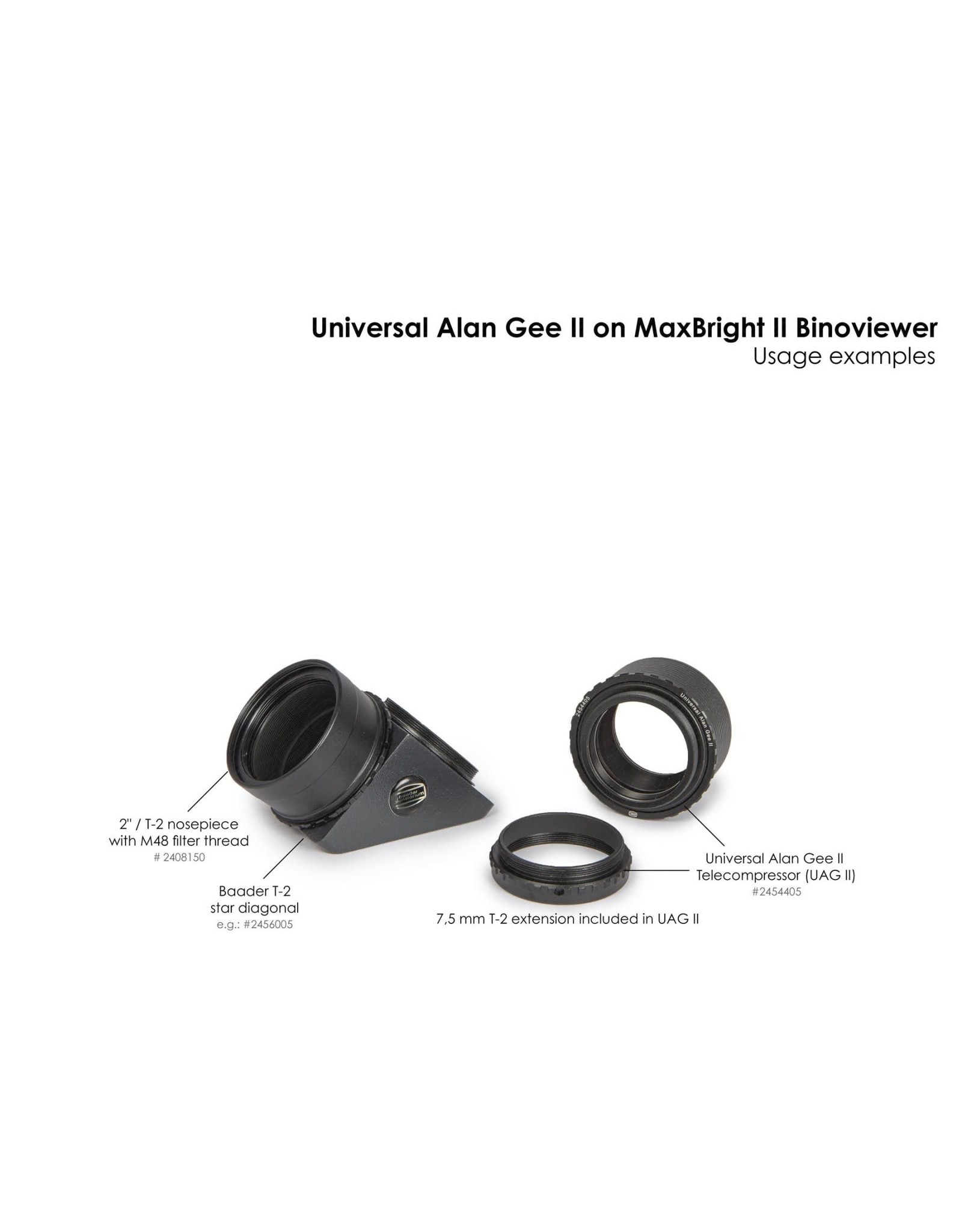 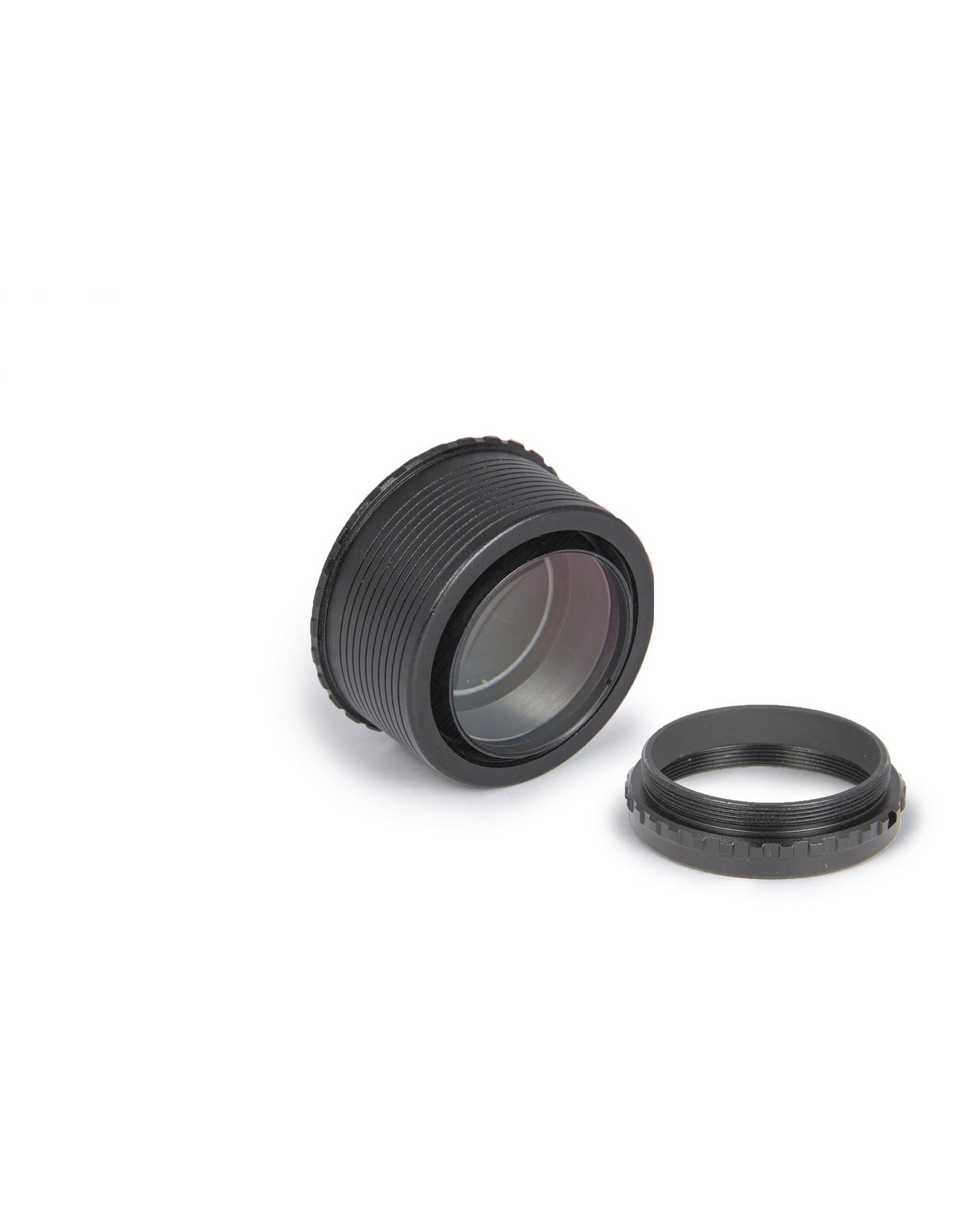 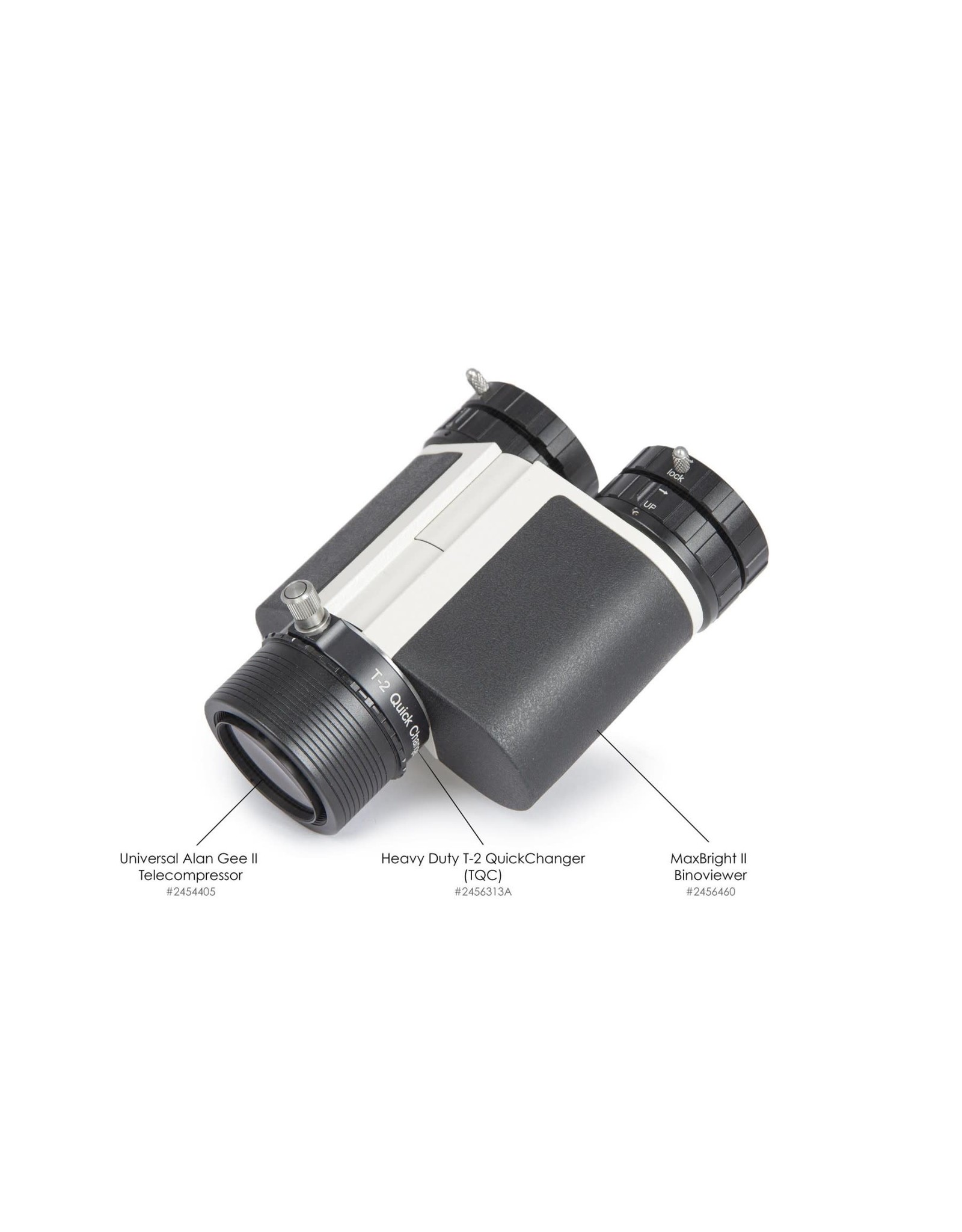 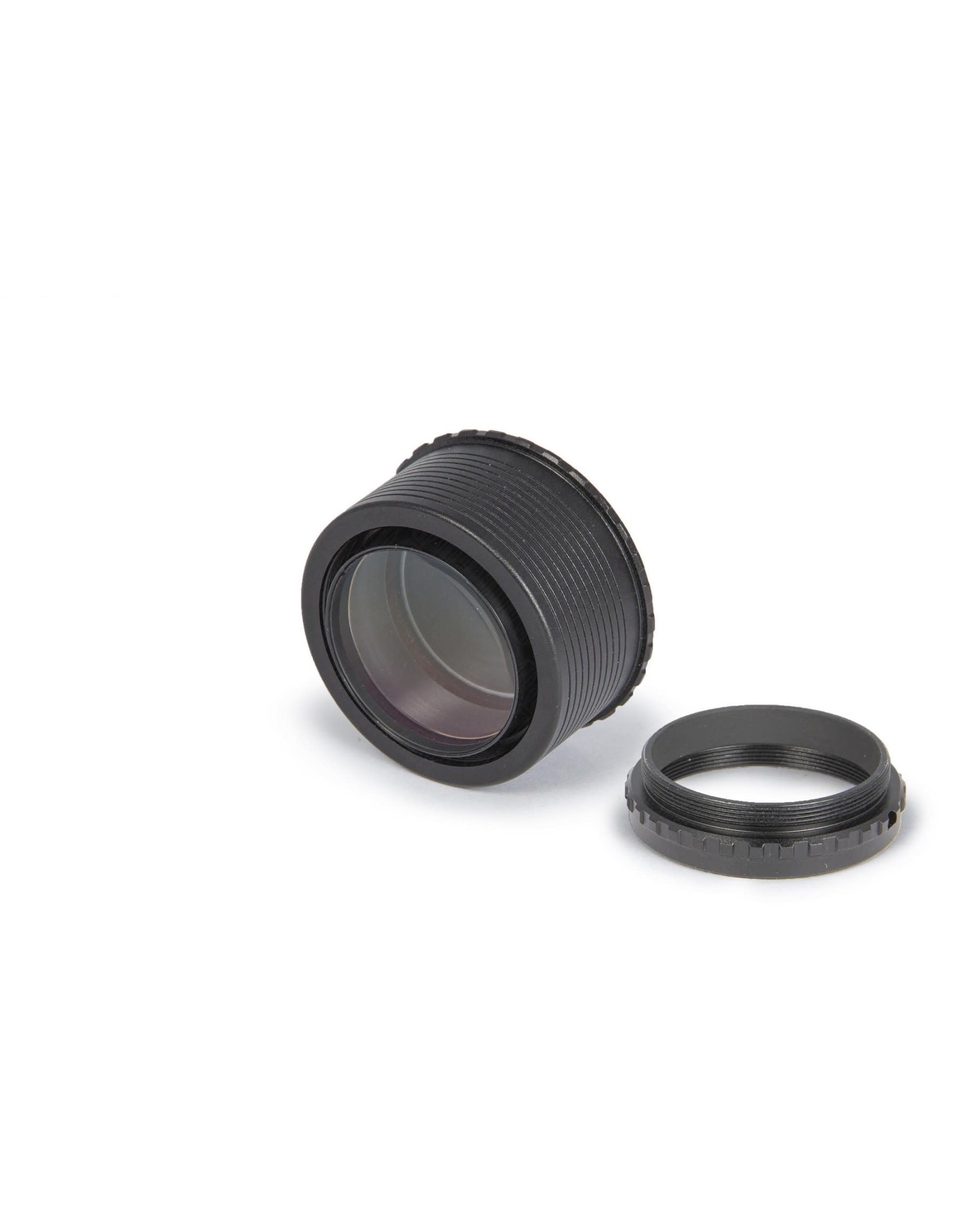 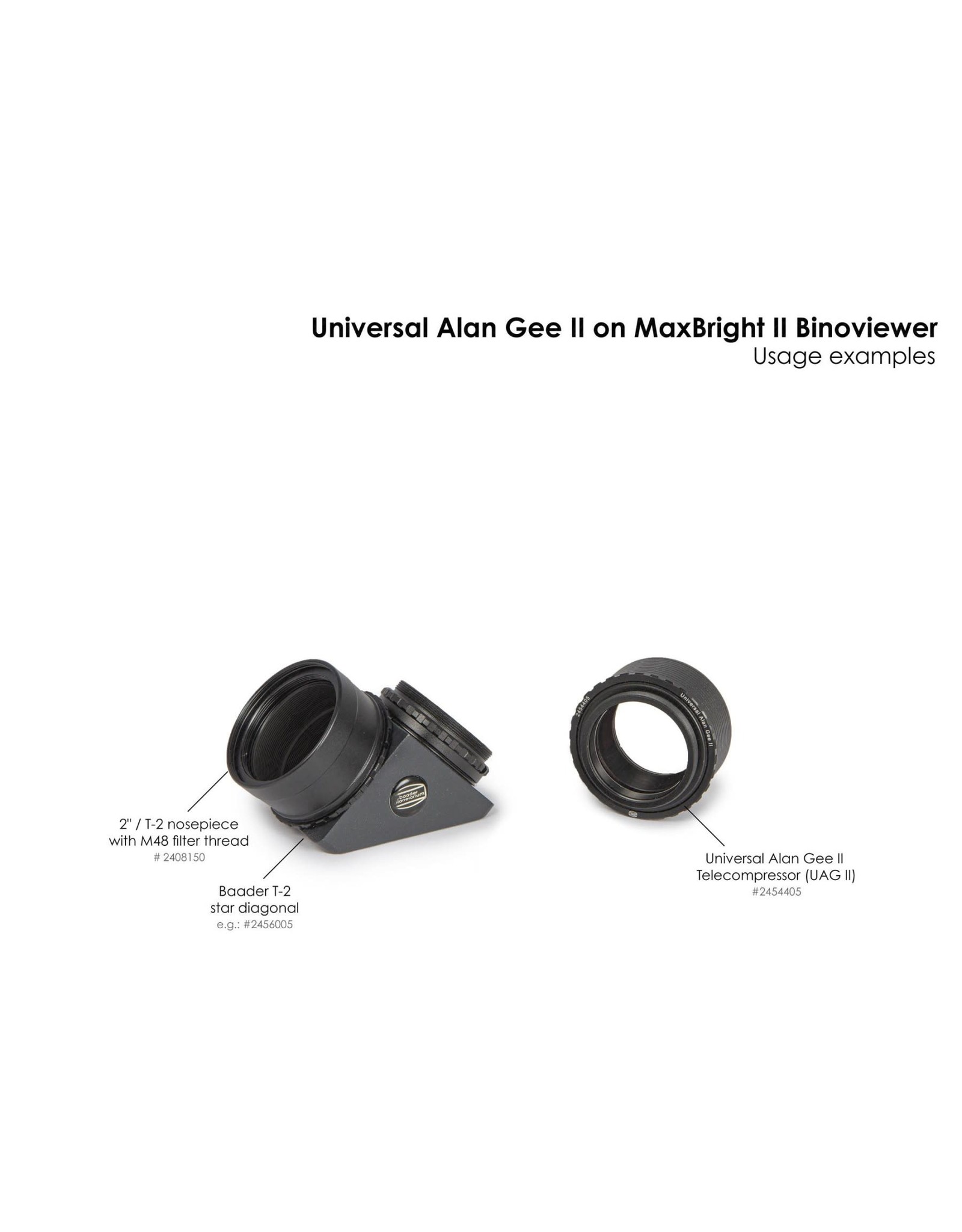 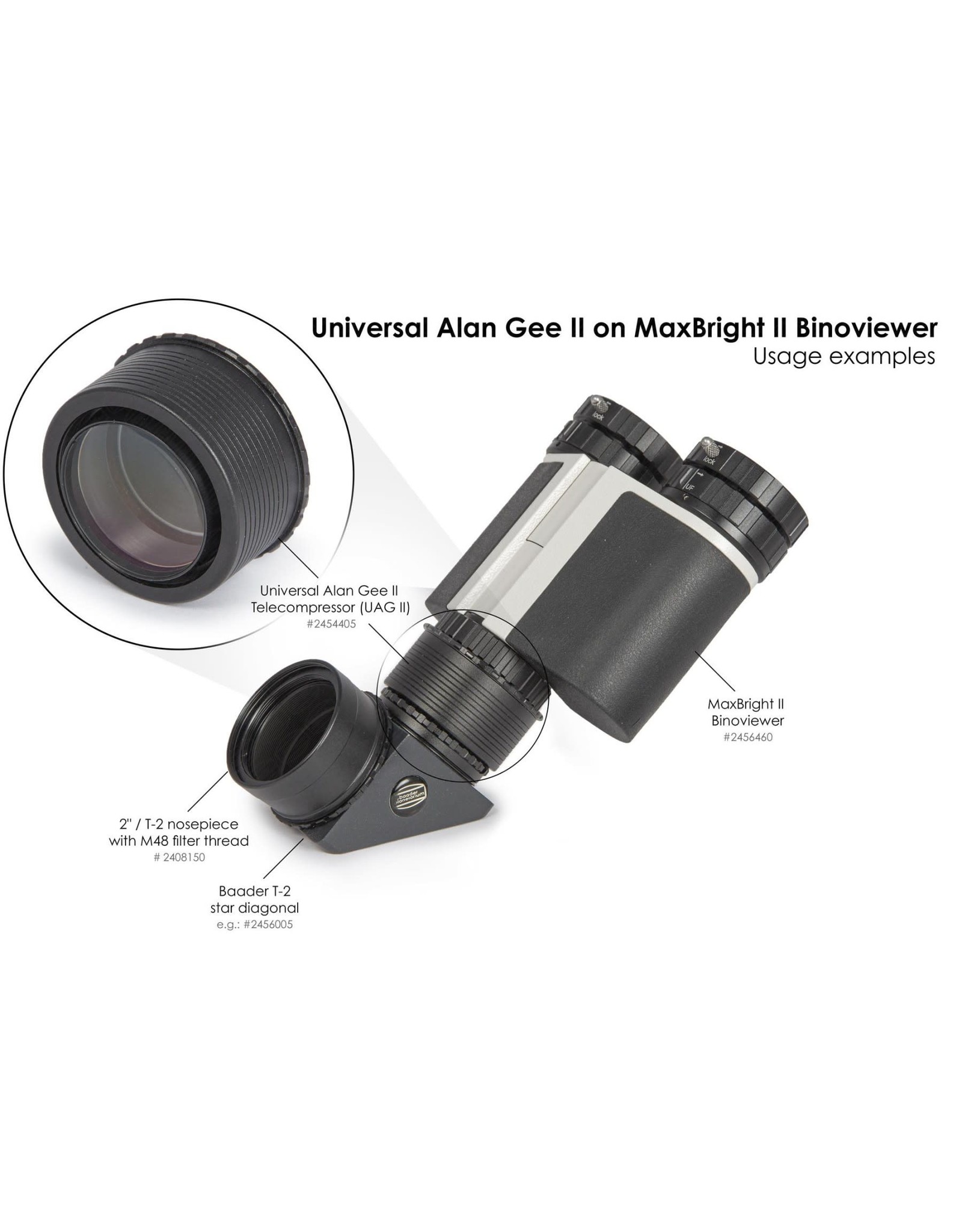 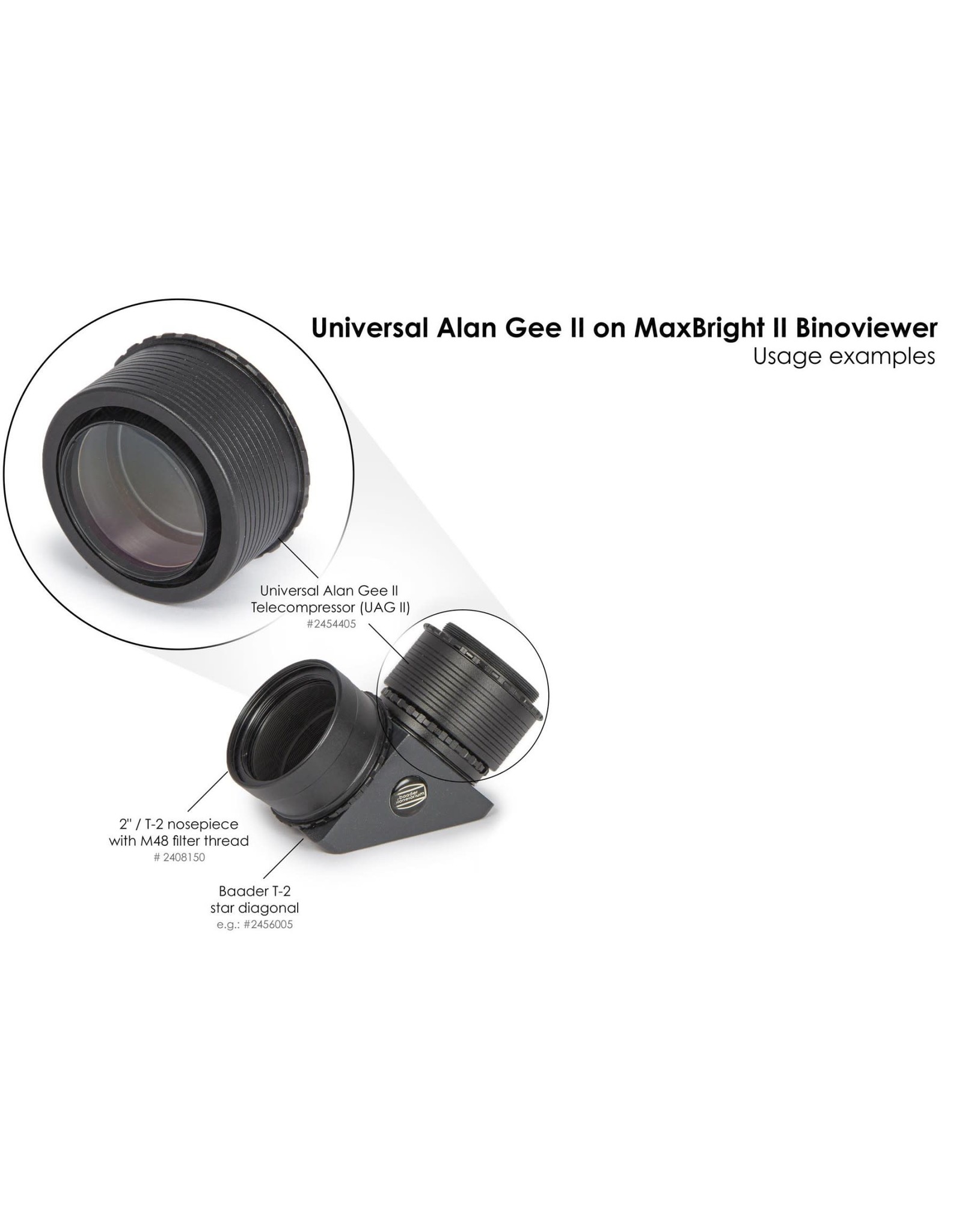 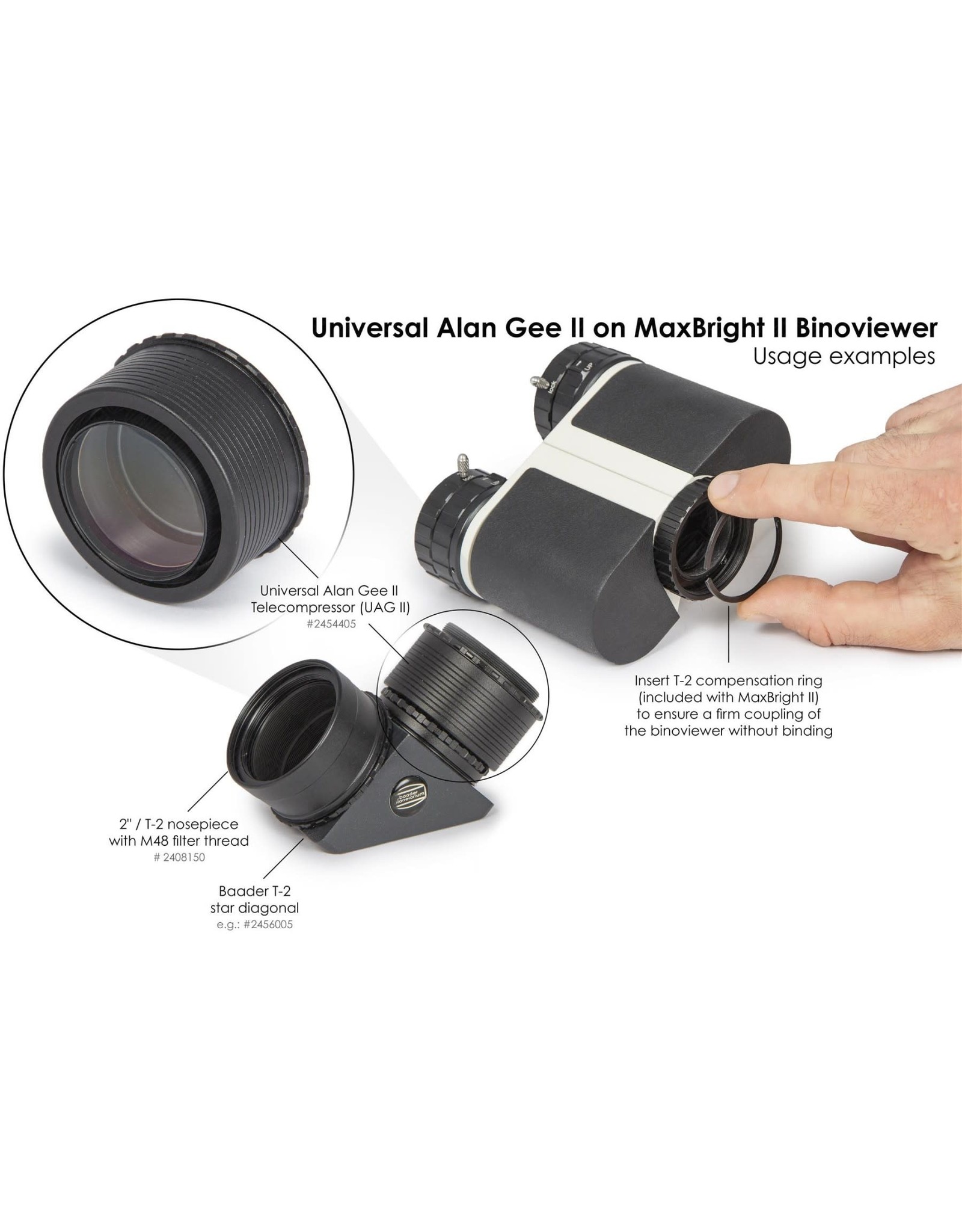 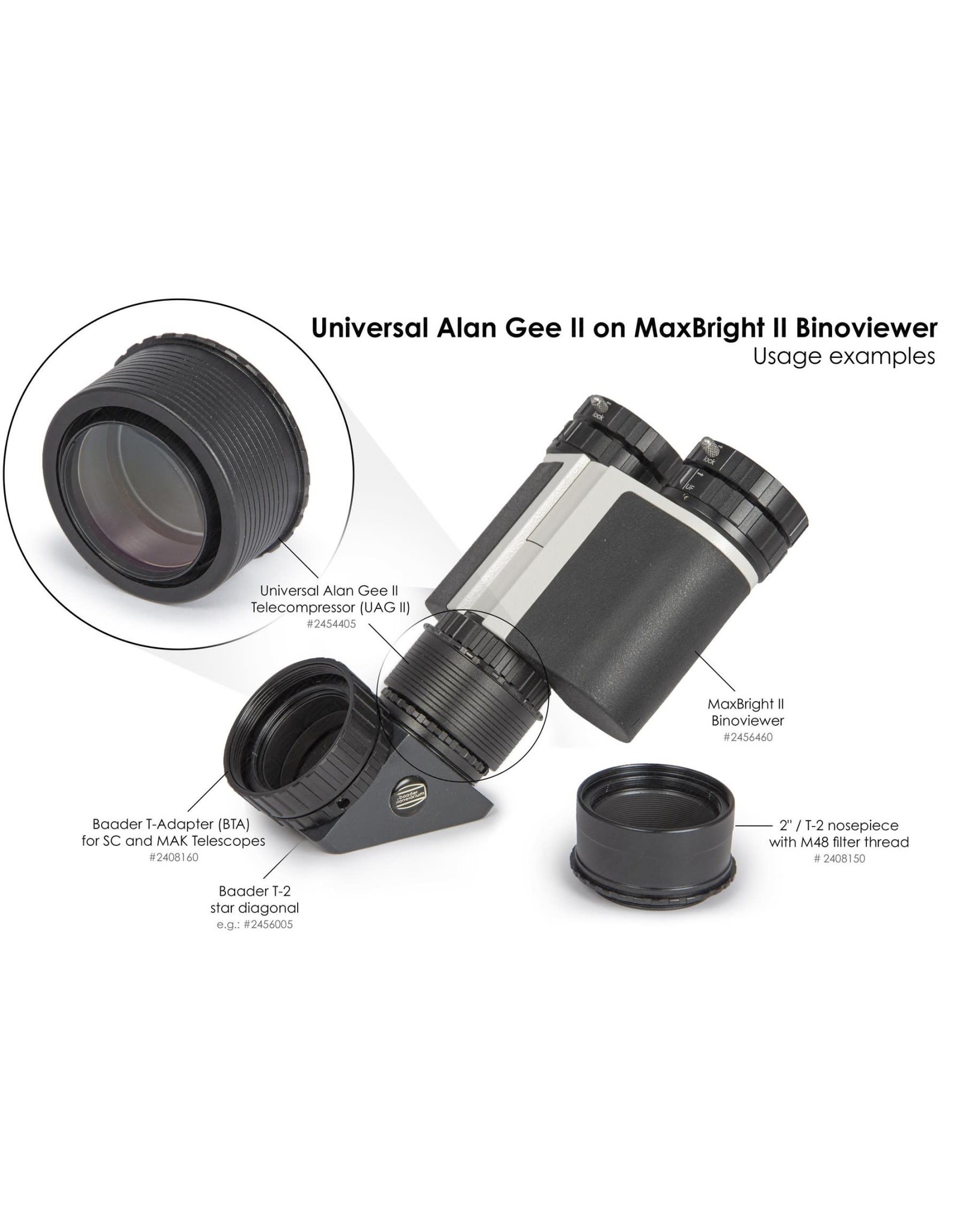 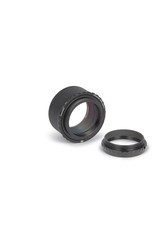 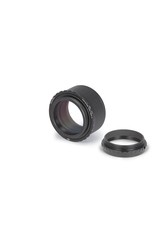 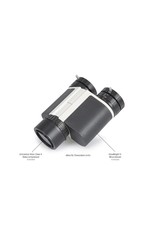 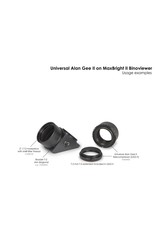 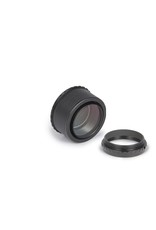 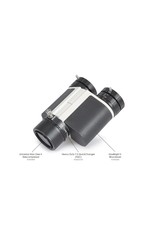 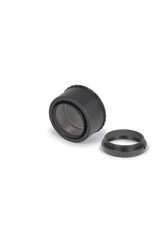 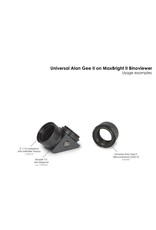 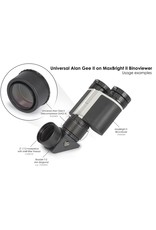 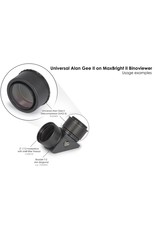 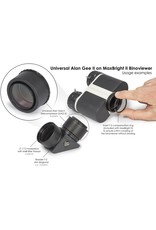 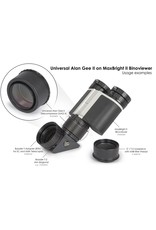 A common limitation that plagues owners of most popular Schmidt-Cassegrain telescopes is the narrow field size and high magnifications produced by their slow optical system (typically, f/10).  Until now, owners of SCTs have lacked a truly versatile and high-quality method of reducing their f/10 (or slower) systems for faster, wider, photographic/CCD and visual fields. (note: the telecompressor is not intended for use with the Meade native f/6.3 SCTs).  Using the Alan Gee with 1¼” eyepieces can yield actual fields of view that match or exceed what you could only achieve with expensive 2" eyepieces!

Baader Planetarium has developed a truly unique and  extremely versatile telecompressor system that delivers the finest wide flat fields your SCT is capable of.  The key to the Alan Gee Mark II Telecompressor is its innovative optical and mechanical design.  Unlike the commonly available and simple single-purpose solutions, the Alan Gee Telecompressor Mark II has been engineered specifically to work well with SCTs in a wide variety of visual and imaging configurations.   The unique design of the Alan Gee Telecompressor positions the lens elements several inches inside the telescope's central baffle tube (see the C8 Cutaway, which shows the lens mounted in the standard imaging configuration).  The result is a sharp, wide, flat field, at a fast focal ratio of f/5.9 – and it even works superbly with Baader Planetarium, Zeiss, and Celestron Binocular Viewers!

The Alan Gee Mark II is made with typical Baader Planetarium attention to detail and flexibility by design.  Designed by Roland Christen, the optical configuration consists of a matched, wide air-spaced doublet, utilizing lenses that are precision polished to the very edge, and anti-reflection coated with the finest 7 layer multi-coatings available today (reflections per surface are less than 0.2% !).  The lenses are individually centered and painstakingly mounted into the precision cell.  The extra-large 35mm clear optical aperture and lens cell design maximizes the field size.  The cell itself is unique. The long extremely thin-wall aluminum tube surfaces are sharp V-threaded and blackened, to reduce stray light reflections.  The telecompressor assembly actually consists of 4 threaded pieces; the lens cell, two 19mm long removable spacer sections, and a flanged end-ring (plus a thin spacer ring used in some configurations).  The OD of the lens cell and spacers is 37.5 mm, permitting the AGII to insert up inside the baffle tube of 8" and larger SCTs.  By using combinations of these pieces, along with varying the placement in the optical path, you can now utilize the Alan Gee in a wide variety of visual and imaging configurations that have never been possible with any other telecompressor (see the section below for suggested configurations).  Please contact us if you have a need for a configuration not shown - we have been able to come up with a way to mount the AGII in practically every situation.

Until now, SCT focal reducers were designed primarily for imaging or single eyepiece use, and lacked the necessary focal length and positioning flexibility to work with binocular viewers.  The Alan Gee Mark II has been designed to work perfectly in concert with the Celestron and Baader Planetarium Binoviewers * (including the Baader/Zeiss Giant Binocular Viewer).  Now, you can turn your SCT into the ultimate large aperture wide field binocular telescope!  Imagine the stunning wide field binocular views that your telescope will deliver (up to a 1.2º field in a C8 or 0.7º in a C14 - using the Baader/Zeiss Giant Binocular Viewer, that's almost a 3X improvement in field area!).  Now, not only will large deep sky objects now fit within the field of view, but even the entire Moon can be comfortably viewed with two eyes.

* Please Note:  The close coupling required for the telecompressor to reach focus with binoviewers limits it's use to only the Baader/Zeiss and Celestron binoviewers.

Imaging Use:  Of course, the Alan Gee Telecompressor Mark II also delivers the ultimate photographic image.  Whether for film or CCD imaging, this telecompressor will produce a sharp, flat field, with the minimum vignetting possible. Coverage for 35mm photography is superb, delivering the sharpest wide-field images possible from your SCT.   Click on the image below, for an idea of a typical image, flat-field, and CCD setup (image courtesy of R.Crouch).