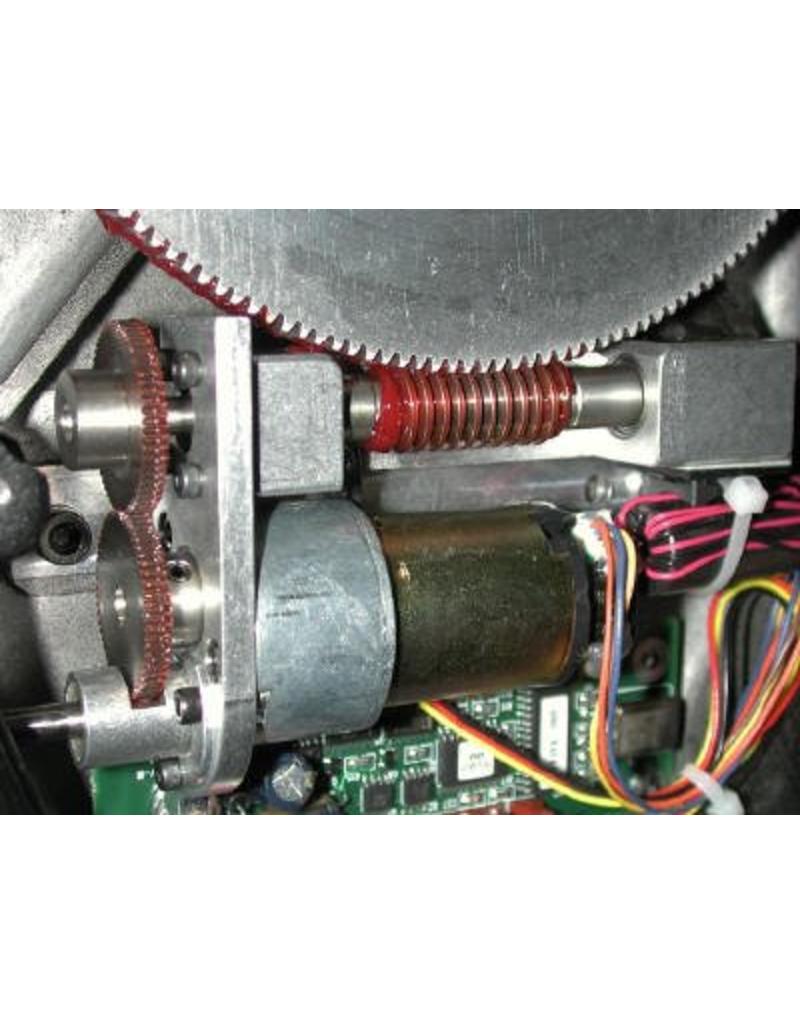 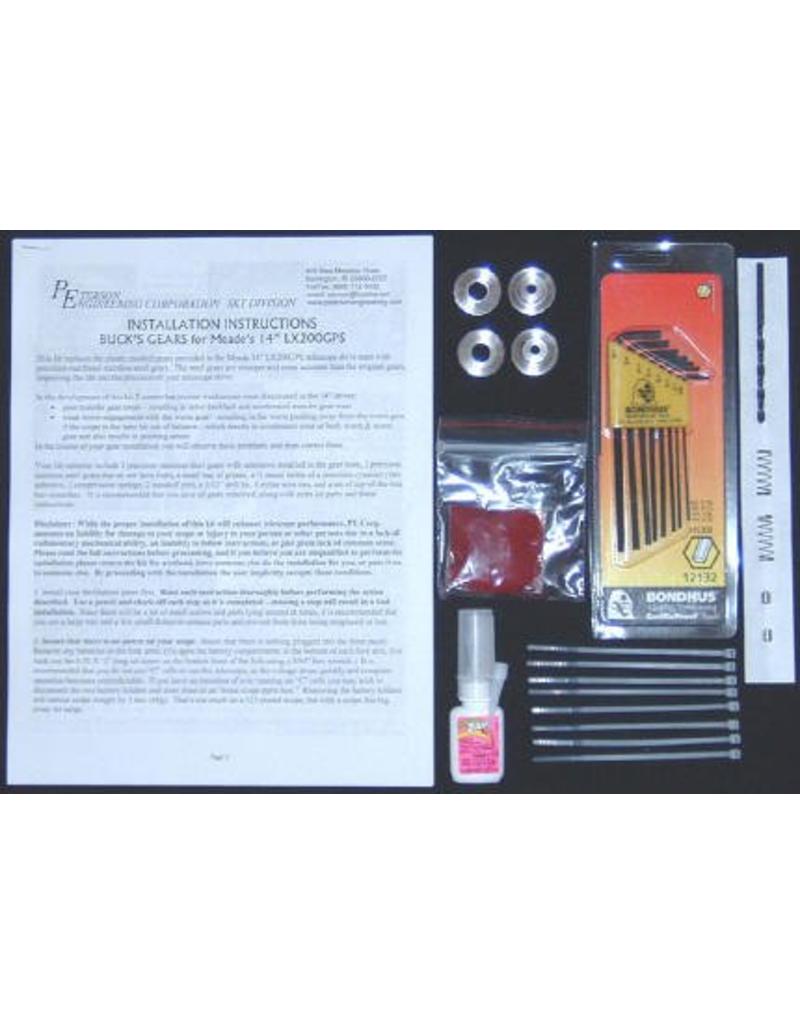 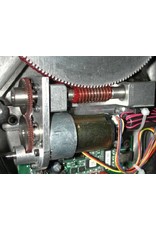 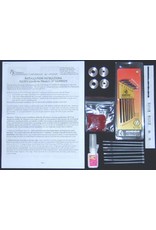 Replace the molded plastic gears in your drive train with precision machined high strength stainless steel gears.  Install a simple but positive worm engagement system.  This kit not only upgrades and adjusts the scope's gears; it addresses and tunes the full mechanical drive system for both axes.

Note: Meade is inconsistent in what they use for gears and drives.  It is strongly recommended that you view Gears or Tune-Up, which do you need? before ordering.

Installation of this kit will:

1)  improve the drive precision in both RA and DEC drives while reducing or eliminating transfer gear backlash.  Our Quality 10 precision cut gears hold dimensional tolerances of ±.0005", while the molded Nylon gears they replace are no better than Quality 8 with a tolerance of ±.002"

2) reduce wear on and prevent damage to the scope's main worm gears through installation of kit parts that provide a positive worm to worm gear engagement.  The worm on this drive has a propensity to lift and partially disengage when under load - resulting in some inaccuracy and abnormal wear on the gears themselves.  As a by-product of this fix the kit will reduce gear drive "chatter" - a noise that indicates that the worm is pushing away from the worm gear.

3) eliminate the tendency of the scope's transfer teeth to break or strip off of the plastic gears when slewing the telescope at high speed, in cold temperatures, or when slewing a scope that is heavily loaded with accessories or is out of balance.

The kit consists of very detailed step-by-step photo illustrated instructions for upgrading the declination and azimuth drives, 2 pairs of precision stainless steel gears, special gear grease, wire wraps, special premium quality adhesive, replacement worm indexing springs, worm standoff pins and a set of top quality hex wrenches.  To correct those scopes where the gears do not mesh closely but are only touching tooth tip to tooth tip in a cogging kind of action, the kit also includes a drill bit.

The original Buck's Gears were developed by the late Buck Harley.  Many LX200GPS users knew Buck from Yahoo's LX200GPS group.  Buck did the development groundwork strictly on his own for the good of the astronomical community.  He offered his gear design to PE Corp. with no compensation to himself simply because of our distribution ability and our experience with this type of a kit.

Although the instructions provided are crystal clear, the installation of this kit is more complex than that of the EZ Focus kit or the EZ Clutch kit.  If you had trouble with either of our other kits, or if you consider yourself to be a klutz, please either do not buy this kit or arrange for someone else to perform the installation for you.  For a sample of the instructions provided with this kit, click SAMPLE.

NOTE: When you order, be sure to specify "Buck's Big Scope Gears" to avoid confusion with the gear kits for the smaller LX200GPS scopes.  If your scope was manufactured prior to September 2004 it contains plastic transfer gears.  And if it was manufactured since then it still probably contains the plastic gears as Meade appears to be using up their old inventory in a rather random fashion.  Effective May '05, Meade seems to be shipping the RCX and 14" GPS scopes with mixed gears - a precision brass gear on the motor output shaft and a molded plastic gear on the worm shaft.  This eliminates a failure mode wherein the teeth of the transfer gear on the motor shaft are damaged when someone turns the manual dec knob while the scope is running.  But it does not address the other problems addressed by the Buck's Gears kit.  Once gain, inspection of your scope drive as detailed in  Gears or Tune-Up, which do you need? is strongly recommended before placing your order.

Geof Wingham has documented a very comprehensive program to improve the tracking of his 12" GPS.  His charts & comments documents the periodic error before and after the installation of Buck's Gears.  Geof's comments are highlighted in red.

Red Line original PE Error of LX200GPS 12" when first placed on a wedge - once I had cleaned the crap and aluminum filings off the worm it started to show 3 distinct cycles as it should.

I tried PEMPro to fix LX200 but it was a waste of time - replaced all the gears with Bucks gears and tightened up and adjusted what I could - it gave a lot smoother PE though it was still high.

Once Bucks gears were in PEMPro had a chance and I was able to reduce PE to around 16 arc sec peak to peak - WOW - Says a lot for the quality of Meade Telescopes. Especially the mounts.

Yahoo RCX400 Users' Group message 636: "The Buck's Gears sold by Pete are the best thing that ever happened to my LX200GPS. I (embarassedly) considered them fluff until I actually measured my PEC. It had a "step" that could not be trained out, and Buck's Gears completely eliminated it. Thanks, Pete."

Yahoo LX200GPS_14 Users' Group message 5023: "I recently purchased and installed Buck's Gears.  What a difference!  I'll find some photo sequences I took before and the one after, but the difference is amazing!  I'm just starting to image with a 14" LX200 in alt/az mode. As such, I'm limited to ~ 40 second to one minute exposures.
Before, I'd get two or three good photos, then the next three or four would have the stars trailed in squiggly (highly technical astrophotog term) trails that often looped back on themselves.  After? Most are rock solid. There is some evidence of very short trails.  When I go polar aligned, I'll have to auto-guide to get long exposures, but it has got to be an easier job after installing the gears.  I'm very satisfied and frankly somewhat amazed at the difference. This
may be the best money I've spent on the scope.

From Cambridge, England:(Yahoo LX200GPS user's group message #85155)I have praised the quality of this kit before but last night was the first night when we have had a seriously clear sky in the East of England.  I wanted to get a better image of the Bubble Nebula than previous attempts. Before the upgrade, my alt/az mounted scope could not track for more than twenty seconds (usually 15) before even a suggestion of a breeze spoiled the image. Note this was not down to PEC but just the wind.  Now, the mount is MUCH stiffer (not binding, it's very smooth - just stiffer) and I got some good 60 second images (although most were at 40). I've received my SXV guide head back from repair so PEC will be re-done on the next good night.  Backlash was so very much better and small remote pointing adjustments were absolutely predictable and accurate.  Thank you Pete!

Yahoo's LX200GPS user group posting #85382: I know I've lauded Buck's gears before.  I had always known that there was a difference in the way the scope performed before and after.  Before, gotos were often out of the field of the eyepiece. After, always within the inner third.  It is abundantly clear, though, with photographs.  Before, you could see the periodic error as worm trails as the stars moved in the field, often well over a tenth of the image frame (14" scope with Canon 20D). I would keep two images, throw away four or five, keep two images, throw away four or five, ... This was 45 second exposures alt/az. After Buck's gears, I"m seeing almost all of the images as keepers.  While most of it may not be the move from nylon to stainless, the gears are a lot more than hardware, but some instructions on eliminating backlash, cleaning, etc.

Yahoo's LX200GPS user group posting #86319: Have just installed Buck's Gears & the EZ Clutch upgrade from Peterson Eng on my LX200GPS 14"  Would just like to say how impressed I am with both the upgrades & the instructions supplied were the best I've seen for anything in my life which was a terrific help as I was rather nervous about dismantling my scope for the first time.  I can be clumsy at the best of times!!  My goto's have significantly improved & repeatability is spot on, I can slew from horizon to horizon & back again & targets are now pretty much back on centre in a 9mm eyepiece time after time.  Thanks to Pete Peterson, his team  of course Buck himself.