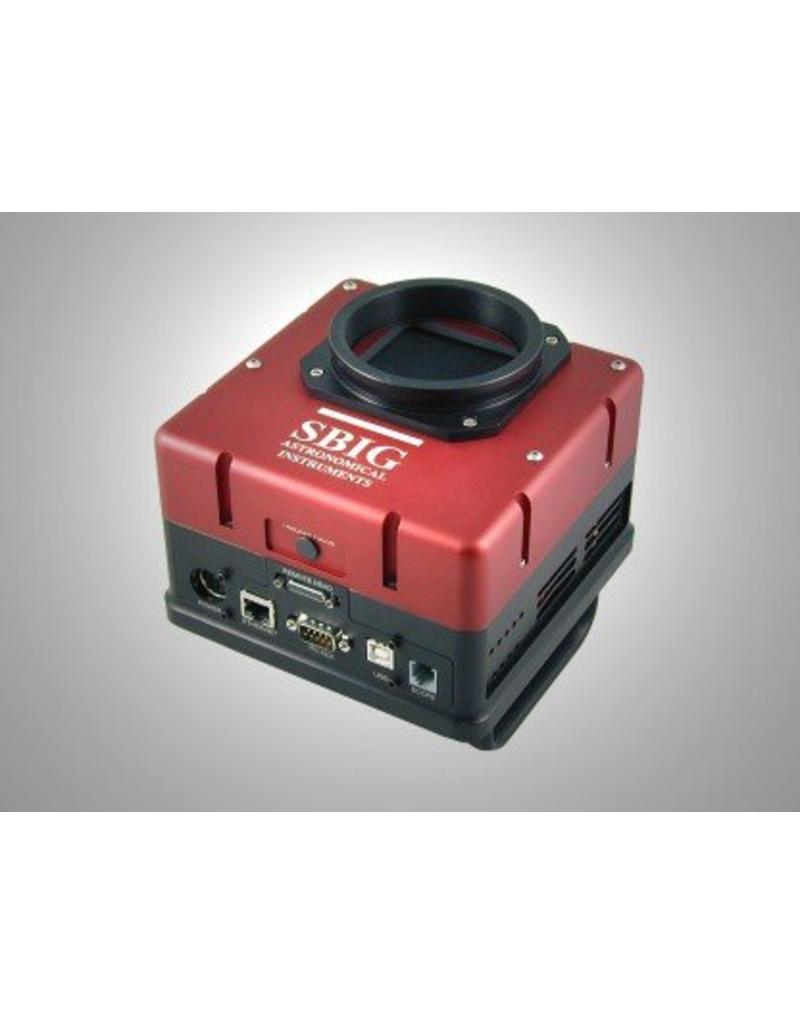 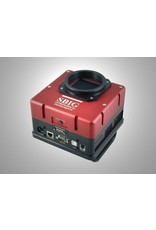 This model is only available as a custom order.
Please contact SBIG tech support to discuss your
needs if you are interested in this model.

The SBIG STX Series represents the ultimate in astronomical imaging systems. The integrated design allows the user to select either Ethernet or high speed USB 2.0 connection to the control computer. The Model STX-16803 uses Kodak’s KAF-16803 CCD with 16 million pixels at 9 microns. The sensor measures almost 37mm square. The built-in tracking CCD is a Kodak KAI-340S with 640 x 480 pixels at 7.4 microns. The STX series has superior cooling to -50 degrees C below ambient with air only. Water-cooling is also possible. STX cameras have internal voltage regulation and may therefore be operated directly from any unregulated 12VDC power supply.

For external guiding, the same same KAI-340 CCD is also used the optional Remote Guide Head, and in the new STX Guider accessory for the FW7-STX filter wheel.  The STX Guider allows you to use the smaller, less expensive 50 mm square filters, and increases the guider FOV with focal reduction optics.  The smaller filters also mean that the FW7-STX wheel can hold 7 filters instead of 5.

The STX uses an innovative pin fin heat sink. This design is the most efficient for dissipating heat per given volume, and while it is more expensive than typical parallel fin heat sinks commonly round elsewhere, it provides superior performance and minimizes size and weight at the same time. This is one of the reasons the STX camera weighs less than competing cameras with similar cooling performance. The new heat sink is an optimized design for this camera using a large custom pin fin heat sink mated directly to the hot side of the 2 stage TE cooler to achieve maximum heat dissipation with a single large fan. In less than 5 minutes the STX achieves a delta of -50C using air cooling only.

If the user desires air cooling only, the fan speed is controllable through software. Variable speed control allows the user to “tune” to fan to eliminate any resonance with the user’s telescope thus suppressing harmonic vibrations.

This feature allows the user the greatest flexibility in the field, and avoids having to return the camera to the factory in order to dry the CCD chamber.

From our first ST-7 camera, SBIG has incorporated an even illumination shutter for taking short exposure flat field frames. However the rotating disk design becomes rather large with ever increasing CCD sizes.  The STX uses a linear shutter design that reduces overall size and weight, while maintaining even illumination on short exposures with large CCDs.  This is something not found on any other camera with a CCD this large. It is well known that the advantage of easier guiding through a separate guide scopes is often limited by differential deflection of the guide scope relative to the main optical axis due to mechanical flexure or shifting of the mirror in the main OTA. While STX cameras can self-guide, doing so places the guide sensor behind the main filter wheel.  This requires larger (and therefore fewer), and more expensive 65 mm square filters.  Guiding through the filters also reduces the amount of light available.

We solved this problem by introducing the STX Guider, which attaches to the FW7-STX filter wheel and adds only 1.1″ of additional back focus distance.  With the guider CCD integrated into the filter wheel, and focal reducing optics to increase the field of view, the optical design is optimized for guiding and everything is controlled through a single interface. The guider connects directly to the camera, and does not require additional power or control cables. The system can be operated by a single software package as one camera.

All STX models can operate with the AO-X Adaptive Optics accessory.  The AO-X uses a tip-tilt window to quickly and precisely adjust the image position in response to autoguider feedback.  With Adaptive Optics there is no backlash, stiction, or lag, and the movements are precise and accurate.  This allows the AO-X to not only remove the effects of periodic error, drift, and wind gusts, but also reduce the effects of atmospheric seeing.

The STX cameras have a convenient I2C AUX port, which controls all accessories including filter wheels and AO-8T Adaptive Optics accessories.

This handy set of 4 LEDs will tell you at a glance if the camera is issuing corrections to the mount in +X, -X, +Y or -Y directions during an imaging session.

Both USB 2.0 and Ethernet are available on STX cameras. The user does not have to choose the interface at the time of purchase. The STX camera also directly powers and controls all optional accessories including filter wheel, STX Guider, and AO-X Adaptive Optics.

The STX series cameras has a full frame image buffer for storing image data during download. This eliminates any possibility of image artifacts caused by computer processing delays during image download.