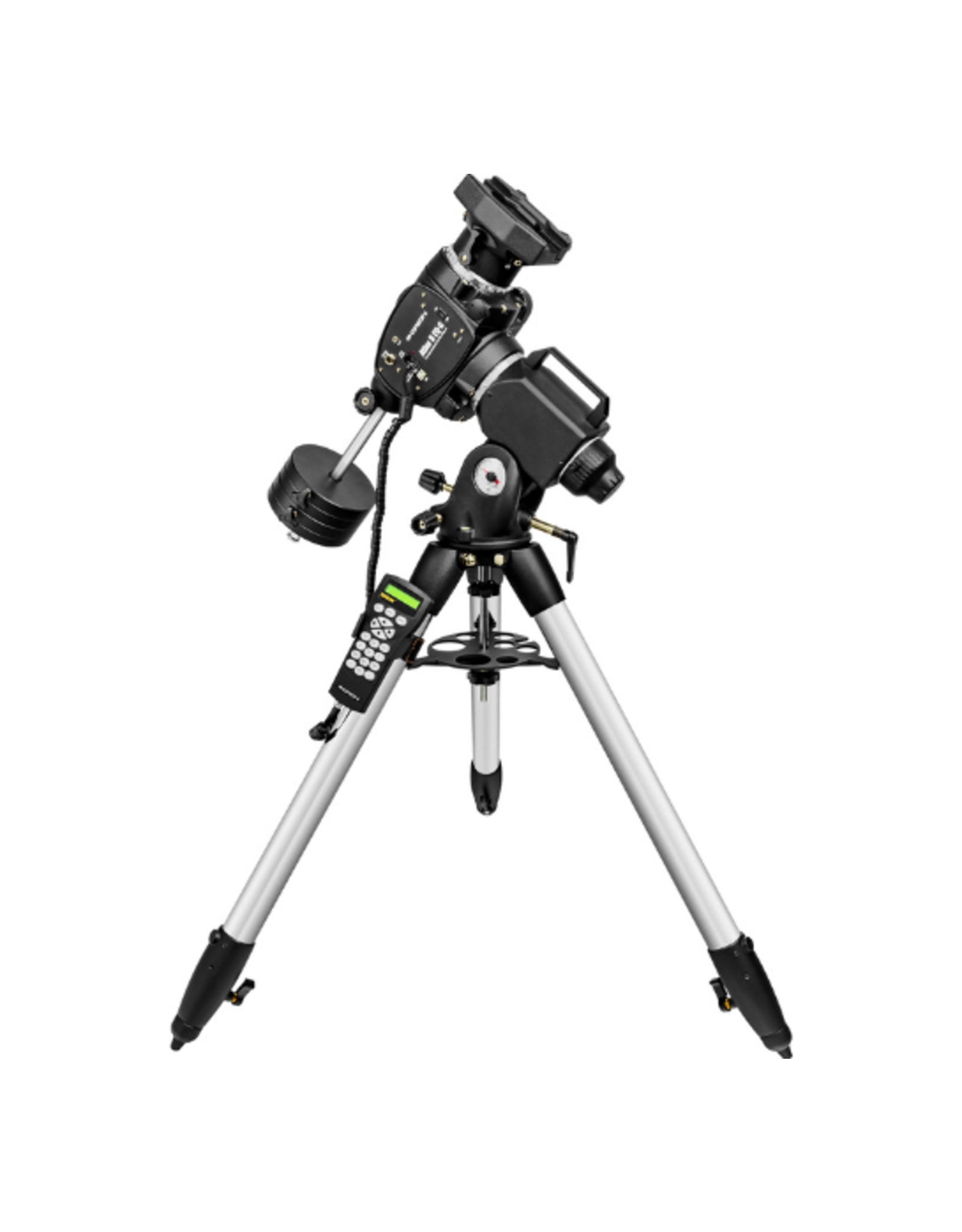 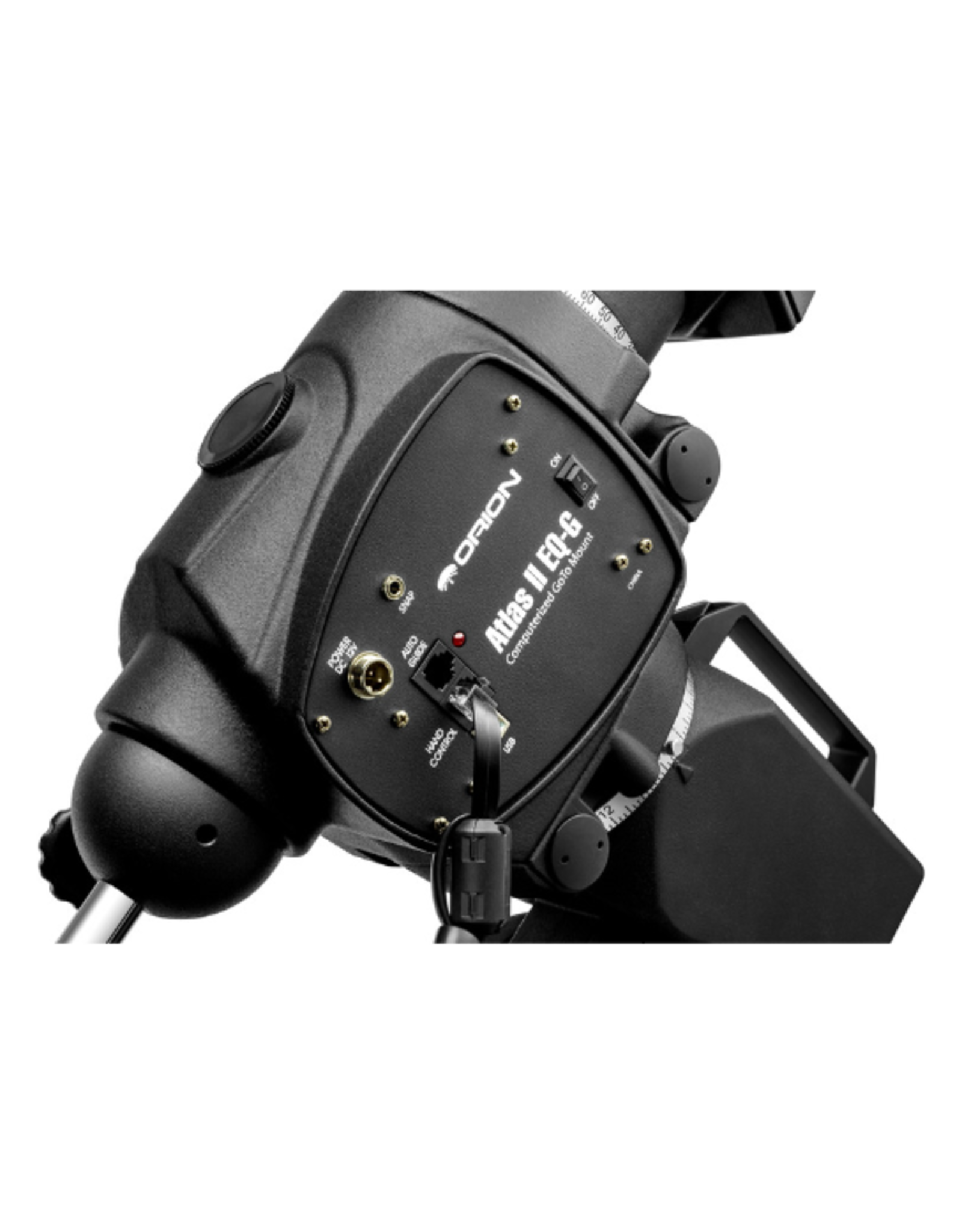 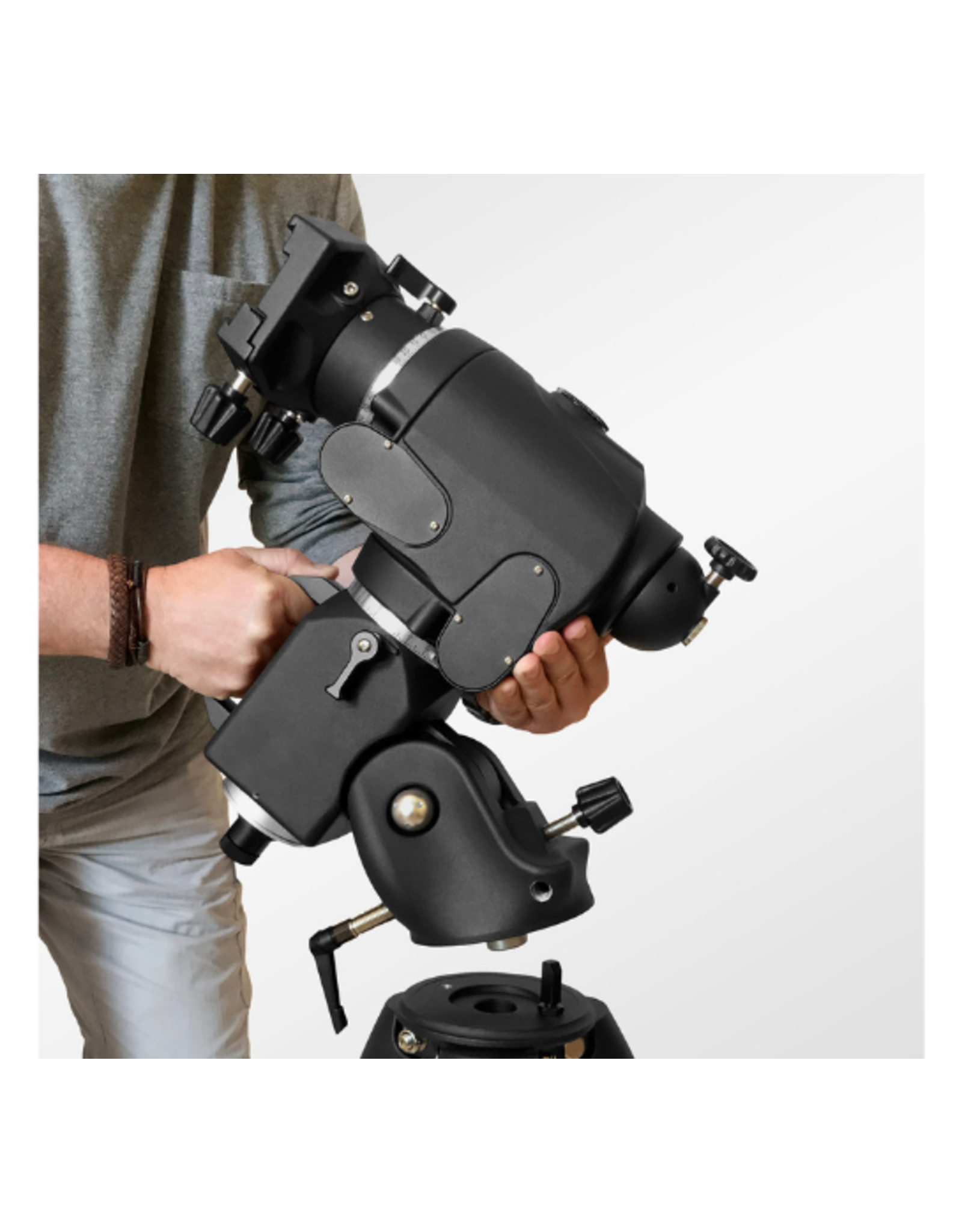 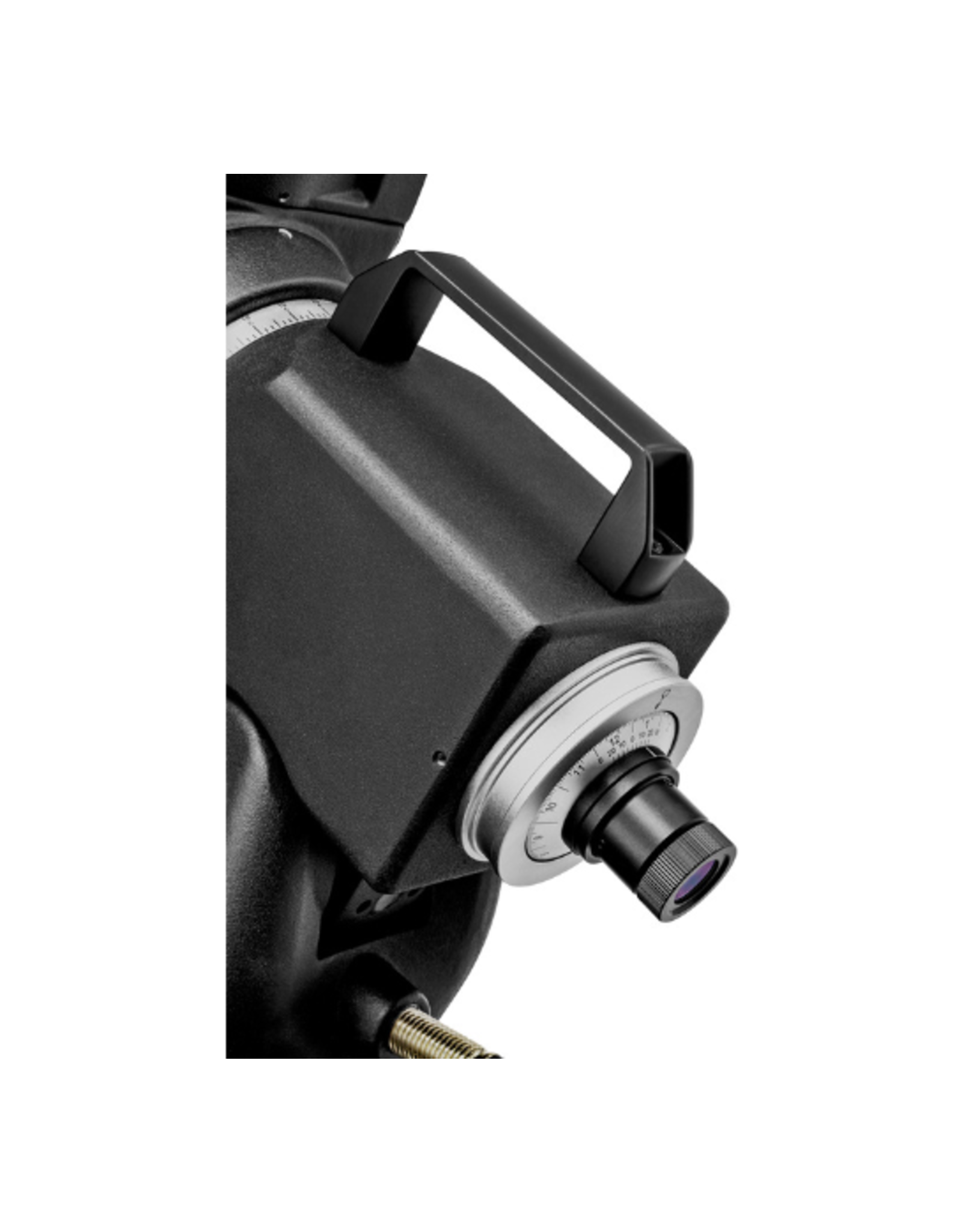 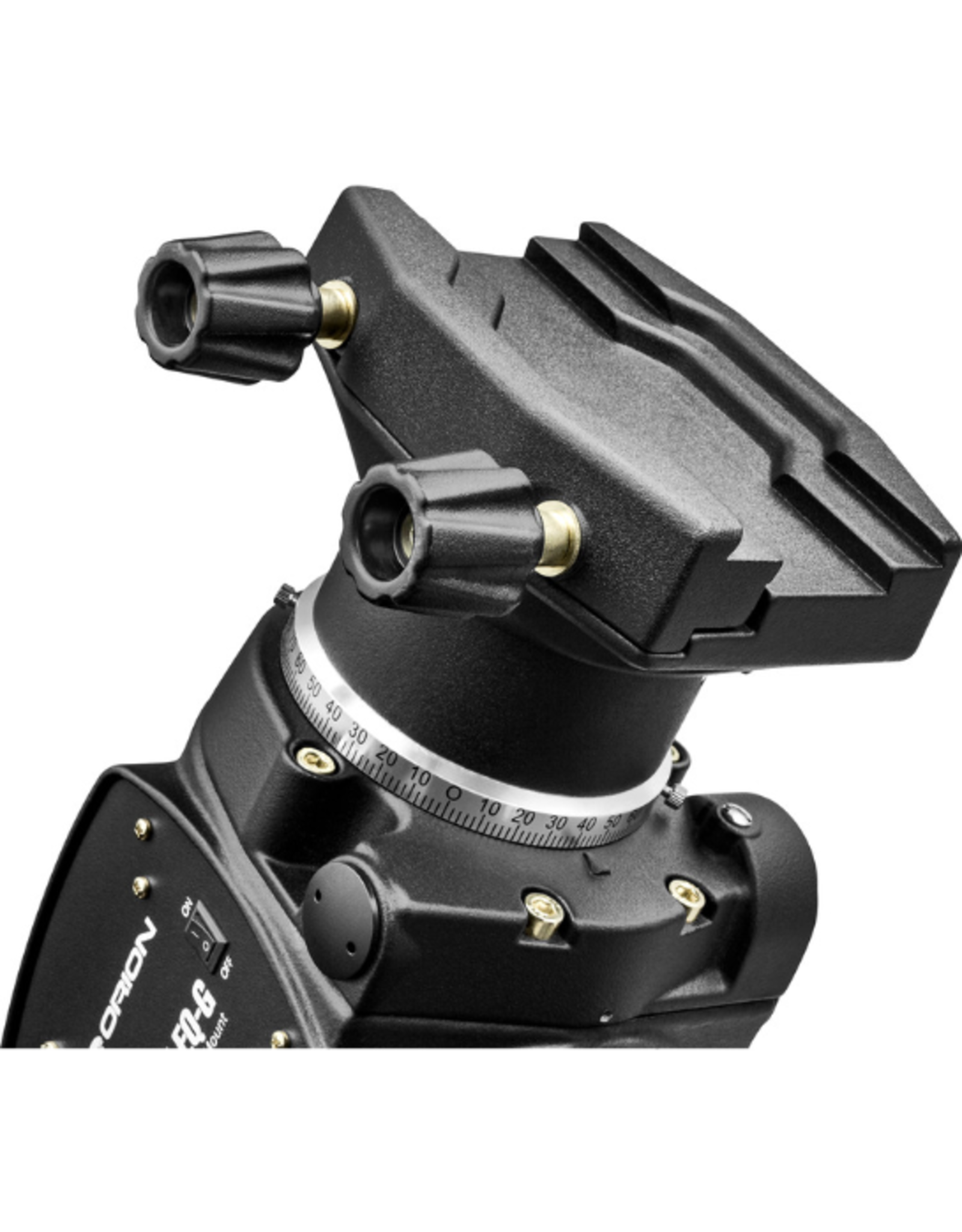 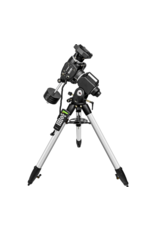 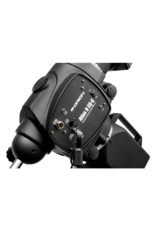 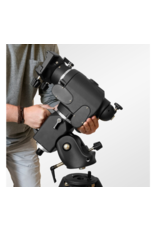 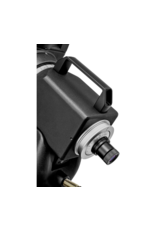 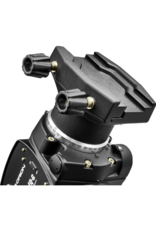 Like the Atlas EQ-G, the new Atlas II EQ-G Equatorial GoTo Mount uses dual stepper motors with a 1.8° step angle. But unlike its predecessor the Atlas II EQ-G incorporates belt drives for whisper-quiet slewing, reduced backlash, and improved guiding accuracy. The mount's latitude adjustment has been beefed up with big bolts that work even with a full telescope load. The dual width saddle is compatible with both D and V style mounting plates. At nearly 40 lbs., the equatorial head now sports a large handle to make lifting it onto and off of the tripod much easier.

The Atlas II EQ-G Equatorial GoTo Mount's drive panel boasts some new features, too, such as a USB port for controlling the mount via computer using optional 3rd party software. A "SNAP" port has been added to allow DSLR camera control via the SynScan hand controller for astrophotography. The 12V power cable now threads onto the jack for a more secure connection that can't pull out.

The built-in illuminated polar scope has been improved to ensure more precise polar alignment for astrophotography. It now features a finely graduated "clock face" reticle for users in the Northern Hemisphere, in keeping with many popular polar alignment apps. The reticle also has alignment stars for the constellation Octans, for use in the Southern Hemisphere. Even the polar scope's protective cover has been improved: it now slips on and secures with a single thumbscrew.

The SynScan hand controller contains a 42,900-object database (including Messier, NGC, and IC catalogs) and an array of practical features and functions, including Tour mode that takes you to the best objects currently visible in the sky, permanent periodic error correction (PPEC), pointing accuracy up to 1 arc-minute, pointing accuracy enhancement (PAE), DSLR camera control, multiple slew speeds and autoguiding rates, the ability to set slewing limits, parking, ASCOM compatibility, and a USB port for updating firmware via the internet (USB cable not included). The Atlas II has a secure, threaded power input jack; a built-in autoguider port for accurate astrophotographic use; and offers 9 different slew speeds (up to 4.2° per second).

The heavy duty tripod is equipped with 2" extendable stainless steel legs and an accessory tray that doubles as a tripod spreader for added rigidity. The tray holds both 1.25" and 2" eyepieces and accessories. Two 11.5-lb. counterweights and a 184mm counterweight shaft extension are included. Total assembled weight of mount and tripod, not including counterweights, is 56 lbs., 11.3 oz.