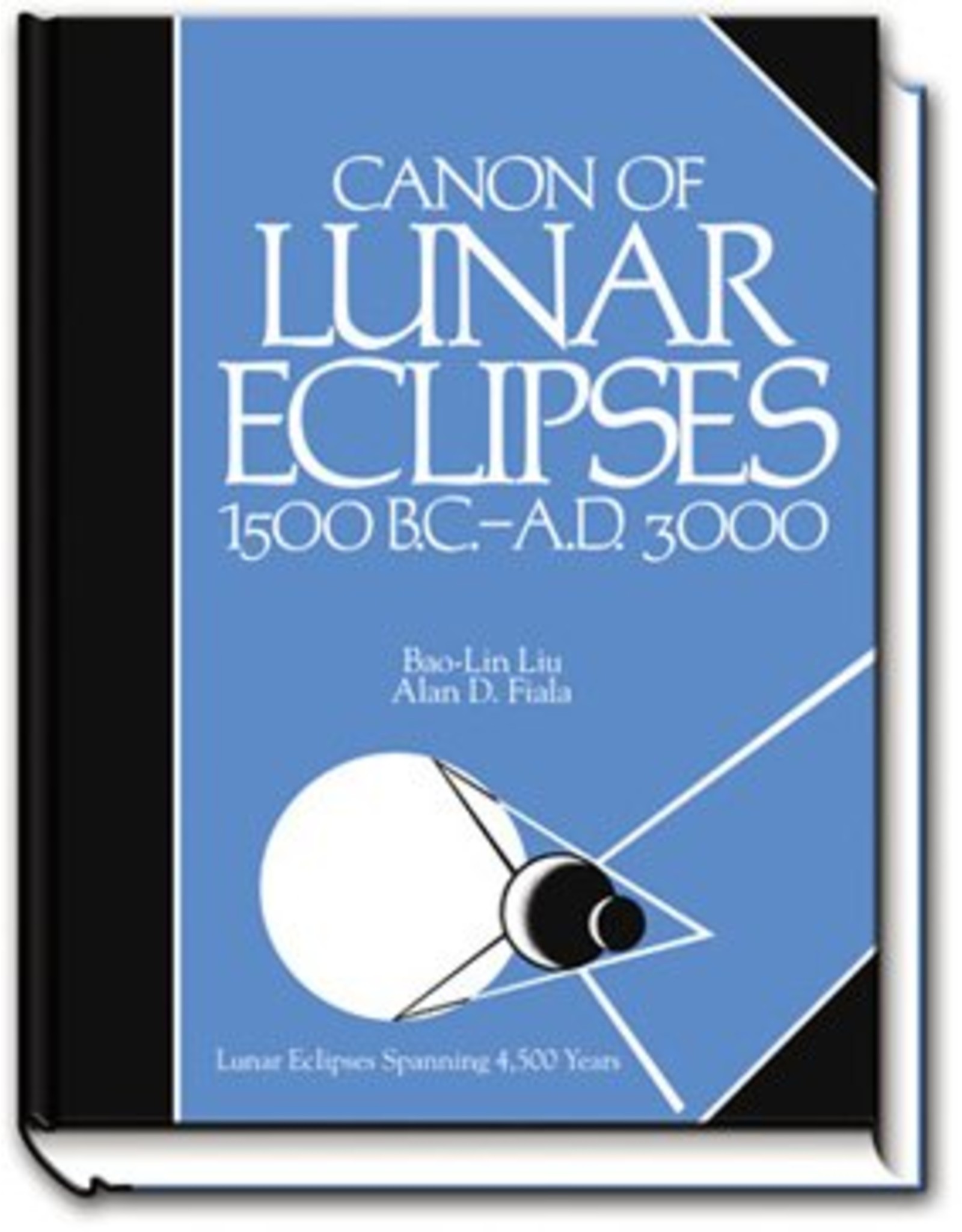 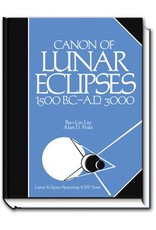 Eclipses of the Moon are dramatic natural events which have been described in records going back for centuries in many civilizations. The Canon of Lunar Eclipses 1500 B.C. - A.D. 3000 lists 10,990 lunar eclipses spaning a time period exceeding four millennia (-1500 to 3015). It uses include:

In planning this Canon the authors were governed by the following objectives:

Though the rate of rotation of the Earth is not well known for the distant past, nor is the motion of the Moon or the Sun well connected to observation the author's present the data in UT instead of TDT. Since DT at distant epochs is of the order of hours they have only applied a gross correction---when required, the user may make any desired differential correction. Overall this decision lifts the burden from the user to keep track of the shifts in time and longitude which would be necessary if TDT were used.

In addition to the extensive tabular data, standardized maps and clear acetate grid overlays are provided to enable the user to graphically determine the areas of eclipse viability from Earth. An optional computer program with the data tables presented in this book is also available (See details to the left).

…Not everyone needs to know intimate details of 4500 years of lunar eclipses, but institutional astronomical libraries do. This is a good place to get them. Both authors are authorities on ephemerides, celestial mechanics, and astronomical calculations. They have thought carefully about the users of these data and have tabulated them in a way that minimized additional calculation and correction for unknowns in the history of the earth’s rotation and the motion of the moon. You have 10,990 lunar events for your eclipse pleasure here. Use them wisely.

…“Well, you could go to a big library and look for the eclipse canons of Oppolzer or Meeus and Mucke. Both are out of print—good luck.” In the last few years, that’s how we at Sky & Telescope have responded to phone calls from anyone seeking accurate data on eclipses in bygone centuries. Now we have a much better reply, at least for eclipses of the Moon.

This work is a collaboration between Alan Fiala, long-time eclipse guru at the U.S. Naval Observatory, and Bao-Lin Liu, a noted authority on historical eclipses and ancient Chinese astronomy. Each page contains the data for 70 consecutive lunar eclipses, one event per line. Clearly the book isn’t a mere observing guide, for three of its pages would span the entire lifetime of any one person. The main table is 157 pages long and lists all lunar eclipses—even the elusive penumbral ones—that take place across 45 centuries.

Such a canon has many uses. Historians can often deduce exact dates of ancient writings simply because an eclipse is mentioned. Comparisons between early records and modern eclipse calculations have already revealed, in detail, how the Earth’s rotation rate has been slowing during the past three thousand years.

What most distinguishes the Liu-Fiala canon is its improved accounting for this variable rotation effect, plus its use of new analytical expressions for the motions of the Moon and Sun developed by French astronomers within the last decade. For example, the total lunar eclipse of April 10–11, –1205 (that is, 1206 B.C.), is now found to have reached maximum phase at 21h 52m Universal Time. The earlier canons of Jean Meeus and Hermann Mucke (published in 1979) and Theodor von Oppolzer (1887) give times that are 26 minutes and 91 minutes later, respectively.

Liu and Fiala also give all the individual contact times of the Moon’s limb with the Earth’s shadow (missing from the earlier works), plus the position angels of the main contacts and the latitude and longitude on Earth where the Moon is directly overhead. Tucked in a sleeve are acetate overlays for polar and Mercator maps, allowing a reader to find out in seconds where on Earth any given eclipse can be seen.

Whether exploring the power of Stonehenge as an eclipse predictor or engaging in other numerological exercises, many people find endless fascination in eclipse cycles. The authors have assigned each eclipse a Saros number for ease in relating it to others in the same series occurring 6,585.32 days apart. . . . . The introduction has some intriguing statistical tables as well. For example, we learn that 1917 and 1982 were the last years to contain three total lunar eclipses; that had not occurred since 1544, and it won’t happen again until 2485.