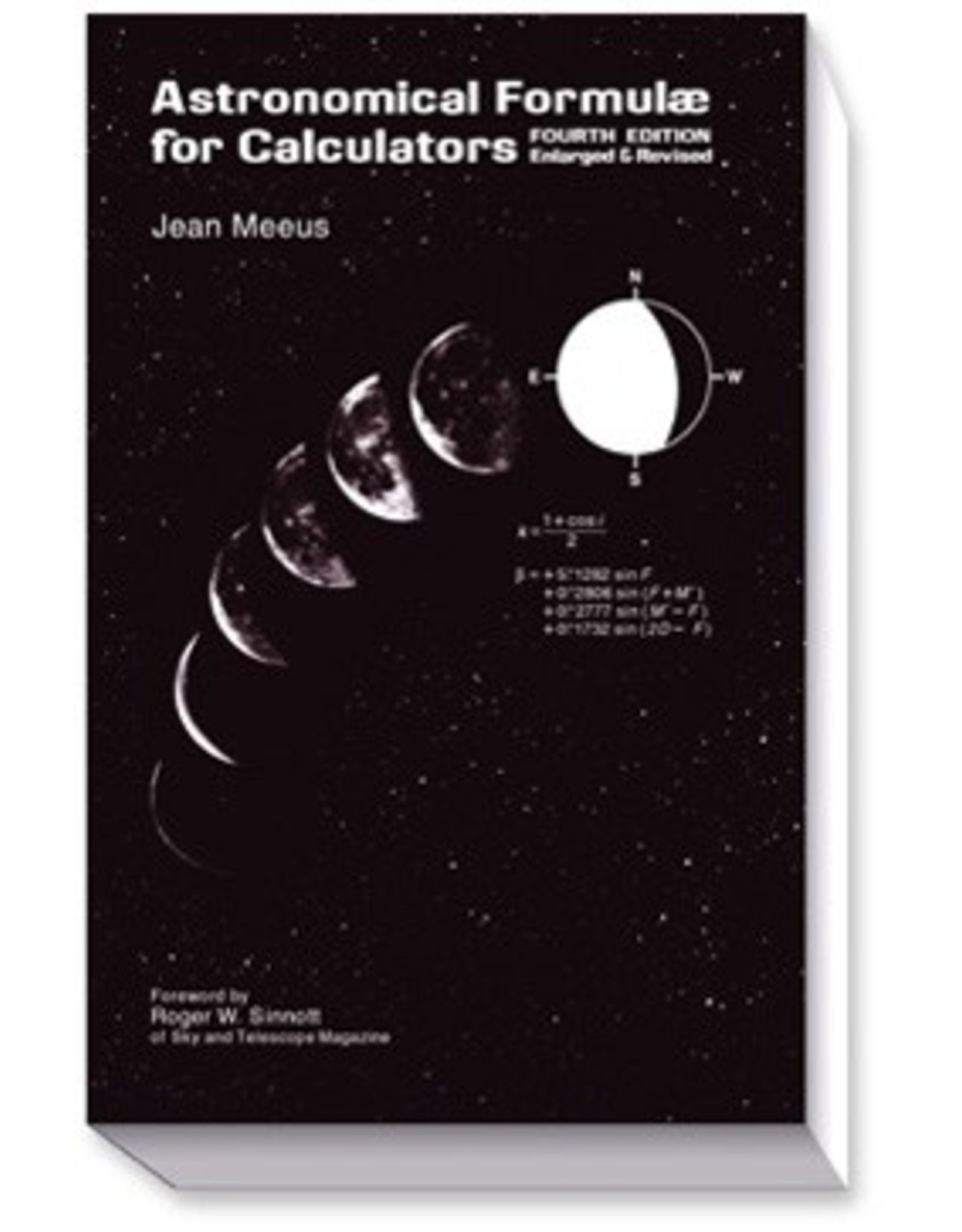 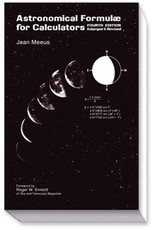 Since its first European printing in 1979,
Astronomical Formulae for Calculators has
met with world-wide acceptance among those looking for Astronomical algorithms.

What the Reviewers said:

"Classic reference on the topic. There are many others, but Meeus is authoritative. The best single compendium of algorithms."

"No serious observer can afford to be without Jean Meeus' latest book. In just under 200 pages, he has covered most of the calculations that one is likely to encounter in practical, computational astronomy. The writing is crisp and clear throughout and well formatted."

Journal of the Royal Astronomical Society of Canada

"This book is a must for any amateur interested in the computational aspects of astronomy, whether his calculator is paper and pencil or a sophisticated mini-computer."

"In this little jewel of a book, Belgian amateur astronomer and astronomical calculator "par excellence" Jean Meeus brings together a host of astronomical formulae for observers, navigators, mathematical hobbyists, and anyone who enjoys putting a pocket calculator or home computer through its paces."

Mercury, Astronomical Society of the Pacific

While originally written for the programmable scientific calculator, many persons have found it a helpful aid to writing programs for microcomputers. Subjects covered are:

Julian Day and Calendar Date
Date of Easter
Ephemeris Time and Universal Time
Geocentric Rectangular Coordinates of an Observer
Sidereal Time at Greenwich
Transformation of Coordinates
Angular Separation
Conjunction Between Two Planets
Bodies in Straight Line
Smallest Circle Containing Three Celestial Bodies
Position Angle of the Moon's Bright Limb
Precession; Nutation
Apparent Place of a Star
Reduction of Ecliptical Elements From One Equinox to Another
Solar Coordinates
Rectangular Coordinates of the Sun
Equinoxes and Solstices
Equation of Time
Equation of Kepler
Elements of the Planetary Orbits
Planets: Principal Perturbations
Elliptic Motion
Parabolic Motion
Planets in Perihelion and Aphelion
Passages Through the Nodes
Correction for Parallax
Position of the Moon
Illuminated Fraction of the Moon's Disk
Phases of the Moon
Eclipses
Illuminated Fraction of the Disk of a Planet
Central Meridian of Jupiter
Positions of the Satellites of Jupiter
Semidiameters of Sun, Moon and Planets
Stellar Magnitudes
Binary Stars
Linear Regression and Correlation.