Annals of the Deep Sky: A Survey of Galactic and Extragalactic Objects, Vol 1-5

Home / Annals of the Deep Sky: A Survey of Galactic and Extragalactic Objects, Vol 1-5 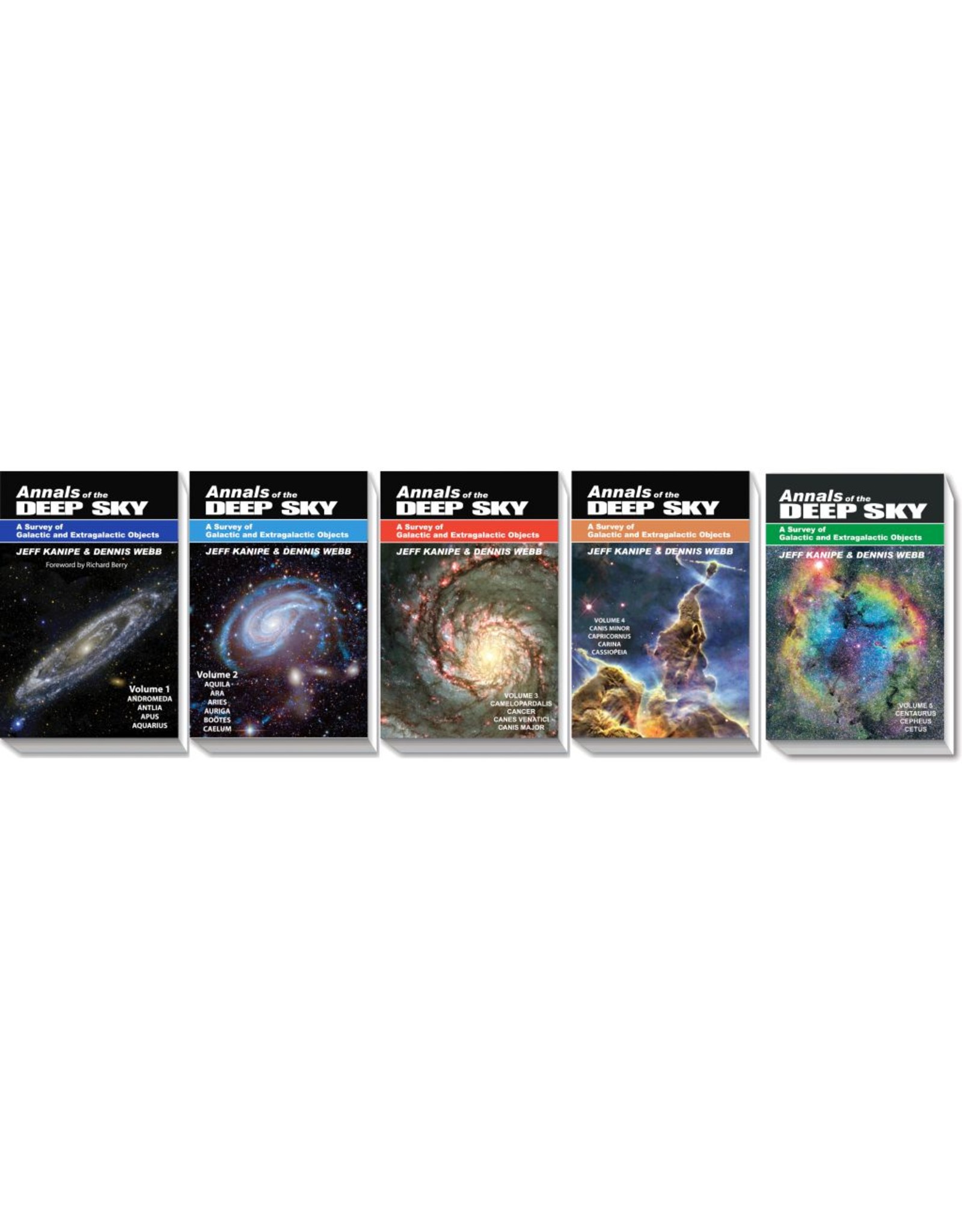 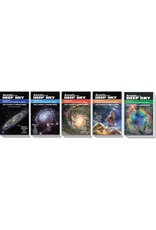 Annals of the Deep Sky: A Survey of Galactic and Extragalactic Objects by Jeff Kanipe and Dennis Webb, Volume 3, 344 6” by 9” pages, 199 illustrations, softbound,Regular Retail price softbound, $24.95. Covers Cameloparadalis, Cancer, Canes Venatici, Canis Major plus Worlds of Discovery: The Search for Exoplanets. For further information see: Table of Contents and Foreword

Annals of the Deep Sky: A Survey of Galactic and Extragalactic Objects by Jeff Kanipe and Dennis Webb, Volume 1, 358 6” by 9” pages, 158 illustrations, softbound. Regular Retail price softbound, $24.95. Covers Andromeda, Antlia, Apus, and Aquarius plus Introductions to Basic Astronomy and Astrophysics. For further information see: Table of Contents and Foreword.

“At last: the sky guide we’ve been waiting for! Annals of the Deep Sky melds through-the-eyepiece observing with up-to-date 21st century astrophysics. Its highly readable format should appeal to observers and non-observers alike. .....[It] operates at many levels. To the novice, it provides guidance and inspiration, offering both basic background and knowledge to grow with. It provides enrichment for established amateurs, pointing out new directions to pursue. And it offers an up-to-date, one-stop astrophysical reference for advanced observers who aspire to contribute to science.” Read the entire Foreword Here.

Here is how Sky and Telescope magazine’s Senior Editor Alan M. MacRobert began his review of Annals of the Deep Sky

“I’ve been waiting since the 1980s. Now it’s happening. We’re getting and expanded, updated successor to the legendary Burnham’s Celestial Handbook.

Someday, I was sure, the next heir would be born to a long and distinguished literary line founded 171 years ago: big, chatty, history- and science-rich guidebooks for telescope enthusiasts, arranged alphabetically by constellation. Admiral William Henry Smyth founded it in 1844 with The Bedford Catalog (volume 2 of his A cycle of Celestial Objects) II’s still in print. Carrying the line forward were Reverend T. W. Webb’s Celestial Objects for Common Telescopes (first published in 1858), William Tyloer Olcott’s slimmer A Field Book of the Stars (1907, with many editions following), C.E. Barn’s 1001 Celestial Wonders (1929), and then Burnham’s biggest of all, published from 1966 to 1978 —full of observational details, science, poetry, and astronomical history in three volumes totaling 2,138 pages.

Annals of the Deep Sky is even more ambitious.”

For the rest of the review see pages 65 and 66 of Sky and Telescope’s December 2015 issue.

Representative binary star orbits. The orbital configurations of five binary stars illustrate the variety of appearance and orientations observed. The orbits at the top depict binary stars that can be resolved visually by amateur observers, with orbital periods lasting centuries. The orbits at the bottom (much enlarged relative to the visual binaries) are detectable only through spectroscopy, and have much shorter orbital periods, indicating that each pair is much closer. Zeta Aurigae is an Algol-type eclipsing binary, where the scale of the orbit is similar to the size of the primary star, A.

Annals is by far the most up-to-date and comprehensive observing guide available today, featuring in-depth astrophysical profiles of the major stars and deep-sky objects by constellation. Volumes 1 and 2 cover the constellations Andromeda through Caelum. When completed, the series will cover all 88 constellations.

“We developed Annals to enhance and cultivate the interest of the hundreds of thousands of amateur astronomers worldwide,” says Colorado-based science author Jeff Kanipe, who is writing the text for the new series. “Many of them actively observe with telescopes, while others prefer the comfort of the armchair, but both are driven by a sincere desire to understand the universe. Our goal is to provide extensive, noteworthy background into stars, clusters, nebulae, galaxies, and galaxy clusters — not just pithy descriptives of what they look like in a telescope. Some of the objects we profile, like the Andromeda Galaxy, are well known, but others not so much — but should be. We think each has an interesting story to tell.”

Annals is the first series to integrate the latest observational discoveries with the most recent astrophysical research. Each profile of a celestial object effectively provides a unique tutorial on some aspect of astrophysics, from how stars are born to why galaxies look the way they do.

Annals also draws on the extensive history of astronomy to put today’s skywatchers in context with the rich lineage of past discoveries that trace how astronomers came to understand the nature of the objects they observe.

Messier 31 deconstructed. Space-based observatories can study an object at wavelengths beyond those we perceive with our eyes, revealing the separate components of a spiral galaxy. The WISE satellite (Wide-field Infrared Survey Explorer) shows old Population II stars and the dust structure of M31 using infrared wavelengths. GALEX (Galaxy Evolution Explorer) paints a picture of the hot young stars (Population I), using ultraviolet light. All three views show that M31 is not the symmetrical object that we observe visually; a possible explanation for this asymmetry is offered in the text.

Innovative diagrams created by retired NASA engineer and manager, observer, and graphic illustrator Dennis Webb, in turn, augment the text. Virtually all of them display multiple layers of scientific information in a neat, uncluttered format. For instance, the binary star illustrations (see "Representative binary star orbits" nearby) depict not only the locations of the components but also how they orbit one another and travel through the sky in three dimensions. Every object with intriguing structure is accompanied by one or more intuitive illustrations that show detail, often at several scales, in many cases from large terrestrial and orbiting observatories.

“In some cases, we ‘deconstruct’ galaxies and nebulae,” says Webb, “with images at different wavelengths, revealing the elements of structure, so important to making sense of these distant mysteries. Illustrations or images often accompany these deconstructions, relating what the amateur can observe to the latest discoveries, encouraging all amateurs to try to push past conventional limits on observing.” See illustration at right for an example.

The series was inspired by the authors’ affection for Burnham’s Celestial Handbook, a three-volume guide published in the 1970s that is still a popular reference. But today, amateur astronomers have become sophisticated in ways that could only have been imagined in Burnham’s day. They have access to larger, more affordable, telescopes, computer-driven mounts, better optical designs, digital and CCD cameras, spectrographs, and photometers. This new frontier has motivated many amateurs to move from merely chalking up the celestial objects they observe to understanding the nature of what they are seeing. In fact, there exists a large cadre of “semi-professional” amateurs who regularly contribute their observational and imaging talents to the science.

Whether a beginner striving to advance their observing skills and knowledge of the universe, or a “semi-pro” with years of observing experience Annals of the Deep Sky will greatly enrich their celestial endeavours.

Jeff Kanipe and Dennis Webb first teamed up to write and illustrate the highly acclaimed The Arp Atlas of Peculiar Galaxies: A Chronicle and Observer’s Guide in 2006. Jeff has worked as a science writer and journalist specializing in astrophysics and cosmology for almost 35 years. His work has appeared in outlets including Sky and Telescope, Astronomy, StarDate, New Scientist, Nature, The World and I, SPACE.com, and Earth & Sky. He has authored or coauthored numerous books. Asteroid 84447 Jeffkanipe is named in his honor for his role in identifying the earliest known image of that asteroid. Today he observes from his home in Colorado.

Dennis is a retired NASA engineer and manager who held leadership roles for the International Space Station and Constellation programs. He has been an observer for more than 25 years starting out with a pair of binoculars in 1989. In 1996 he built a 17.5-inch Dobsonian telescope and in 1997 began imaging with a home-built astronomical CCD camera. While he always knew that he harbored artistic instincts, they blossomed after he discovered the power of Adobe Photoshop and Illustrator.

What people are saying about Jeff Kanipe and Dennis Webb’s previous book, The Arp Atlas of Peculiar Galaxies, A Chronicle and Observer’s Guide

“…this is a handsome tome designed by two knowledgeable observers who know what they’re doing. Kanipe and Webb have created an observing guide that all serious deep-sky hunters will want on their bookshelves – and near their telescopes.” – Ken Hewitt-White, Sky and Telescope

“…I can highly recommend this well written and well-presented book as both a fascinating story and observer’s guide. I would suggest that it is more useful as an observer’s guide for those with a larger telescope and access to dark skies. Whilst experienced observers will see more in each Arp, as a relative newcomer I have found it a valuable aid to enhancing my observing skills.”
– Patrick Kavanagh, ICEINSPACE (Australia)

“In my opinion, Willman-Bell just published an extremely valuable addition to the library of a serious observing nut! The Arp Atlas of Peculiar Galaxies. A Chronicle and Observer’s Guide constitutes an excellent resource for advanced visual observers with larger instruments or a dedicated CCDer with modest equipment. This is a book in its own league…” – Jan Wisniewski, Regulus, The Newsletter of the Royal Astronomical Society of Canada – Kingston Centre

“I can state without reservation that this is the most beautiful and informative astronomy book I currently own, and I own quite a few!” – Dr. Greg Parker, New Forest Observatory.

“Received my copy of the new Arp Atlas of Peculiar Galaxies... It is terrific... Maybe the best atlas I have ever seen.” –Michael Coulson, on starrynights.com

“I just received my copy of The Arp Atlas of Peculiar Galaxies. This is one incredibly impressive book! I have much admiration for Jeff Kanipe and Dennis Webb for producing such a substantial and beautiful work… Even in this day of electronic information there's an intangible good feeling about holding a beautiful book in your hands and I got that feeling with this book. Willmann-Bell has done a great job putting it all into a very attractive package…” - Dr. Robert Gendler, astrophotographer

“It is a work of art! What a beautiful book. I am truly impressed.” – Dr. Barry Madore, The Carnegie Observatories